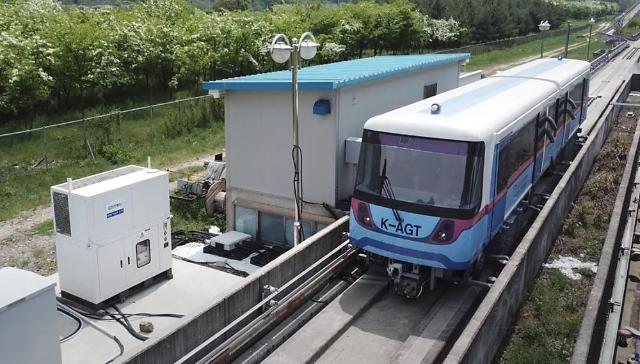 [Courtesy of the Ministry of Land, Infrastructure and Transport ]

The meeting on May 7 involved some 30 experts from France, Italia, Germany, China, Japan and South Korea, which are members of a TC9 ahG 29 group at the International Electrotechnical Commission (IEC), which prepares and publishes international standards for electrotechnology, according to the Ministry of Land, Infrastructure and Transport.

The IEC ad-hoc group deals with the interoperability and safety of a dynamic wireless power transfer (WPT) system for railways. "It is very meaningful in that international discussions have begun in earnest on international standards related to the interoperability and safety of the railway wireless power transfer system proposed by South Korea," the ministry said in a statement on May 10.

Cordless charging uses magnetic waves. There is no risk of electric shock, and WPT can reduce tunnel construction costs and fine dust generation. It is possible to freely select the location of stations and increase the length of routes and battery usage time, and reduce waiting time for charging.

"South Korea is expected to lead railway WPT technology and lay the foundation for preoccupation in overseas markets through the establishment of international standards," Kang Hee-up, an official at the ministry's railway safety policy bureau, was quoted as saying.