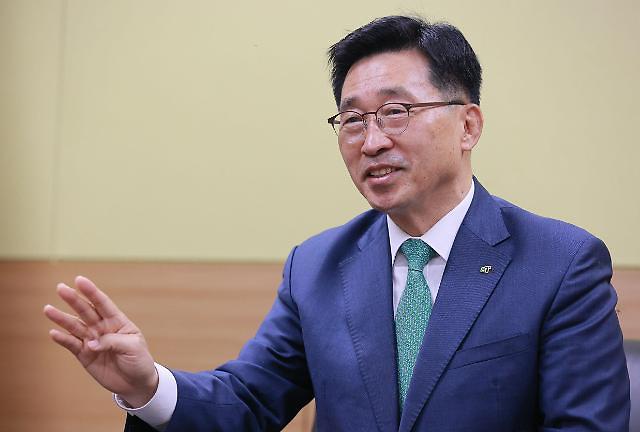 
SEOUL -- South Korea is on guard against potential threats to food security amid growing uncertainties caused by climate change and a COVOD-19 pandemic that has raised global awareness of food sovereignty. A government agency responsible for storing and exporting agricultural products advocates the operation of a massive food hub in a vast area of reclaimed land created by the world's longest man-made sea barrier to cope with a food crisis.

Since he took office in March, Kim Choon-jin, president of Korea Agro-Fisheries & Food Trade Corp. (aT), has campaigned hard for the construction of food-related infrastructure in Saemanguem near the southwestern port city of Gunsan. A seawall stretching 33 kilometers (20 miles) was built in 2010 to convert an estuarine tidal flat into agricultural or industrial land. President Moon Jae-in came up with a fresh project in 2018 to build a renewable energy complex using wind and sunlight in Saemanguem.

Food security should be maintained as South Korea's top priority, Kim said, calling for the early construction of a food "Kombinat," a Russian term for the combination of various enterprises. "Food is now weaponized in countries around the world. At the national level, stockpiles need to be managed at all times in preparation for a food crisis. That's why we need the food Kombinat," Kim said in an interview with Aju Business Daily. "The final goal is to establish food security through Kombinat and establish itself as a regional hub in Northeast Asia that supplies food to neighboring countries."

South Korea is heavily dependent on international trade, but the amount of grains produced at home and cultivated acreage are small in comparison to the population. Kim said South Korea needs stable grain imports and stockpiling. As of 2019, South Korea's food self-sufficiency rate stood at 45.8 percent. More worrisome, the overall grain self-sufficiency rate including feed is 21 percent.

South Korea has maintained a strict public stockpiling system just for rice, which is still the main source of daily calories, although a steady decline in rice consumption led to a surge in the rice inventory. The government provides subsidies to farms and purchases oversupplied rice as compensation for falling prices. State warehouses are packed with rice reserves, far higher than 800,000 tons recommended by the Food and Agriculture Organization.

Kim thinks the public stockpiling of soybeans, wheat, corn and other grains is essential as South Korea is vulnerable to export restrictions by grain exporters. "The self-sufficiency rate of food is getting lower. Now we need to save it for food security," he said, adding COVID-19 has highlighted the importance of stockpiling and reminded Koreans of their deep-rooted tradition of habitually accumulating grains in preparation for rainy days.

Kim promotes a cluster of grain warehouses, a seed depository, processing and feed plants, and other food-related facilities as an effective long-term solution to managing food reserves in preparation for a food crisis. "Food has to be piled up in our country," he said, describing Saemanguem as an ideal place to build large grain terminals and utilize clean energy.

Grain stockpiling in Saemangeum can serve as a food hub in Northeast Asia as China, Japan and North Korea import grains, Kim said, adding South Korea can benchmark the Netherlands which exported about $110 billion of agricultural and fishery products in 2020. "The Netherlands is not a big country, and the amount of (grain) production is not that big either. All are the results of intermediary trade while it serves as a food hub. We are also in a geopolitical position to process and export food as much as possible and to engage in merchant trade."

In 2020, exports of agricultural, forestry and fishery products from South Korea rose 3.6 percent on-year to a record high of $9.87 billion, mainly thanks to the swift adoption of online and mobile-based export support systems that have achieved more than expected results. Against this backdrop, Kim's agency would strengthen digital marketing and draw up customized export support policies for each country to sustain export growth.

"Instead of foreign platforms, we would like to build a competitive home-grown service. This requires a big picture of securing big data," Kim said, promising to promote smart farming and an economy of communion. He presented a smart farm model operated by village companies through cooperation with related agencies. Old people can provide labor at smart farms run by a younger generation with profits distributed equally to realize rural welfare. Kim suggests his agency can secure markets and contribute to stable income generation.

South Korea has pushed for a smart farm system for crop growers, but many elderly farmers who were familiar with traditional farming methods complain about the complexity of digital farming. The state-run Rural Development Administration (RDA) has created a new system using cloud computing, big data analysis, artificial intelligence and deep learning to alleviate the stress of using complicated machines. RDA's long-term goal is to transform the know-how of veteran farmers and their farming knowledge into digital data.

Smart farms require minimum space and workforce as artificial intelligence-based facilities autonomously control a farming environment such as light, moisture and wind to accelerate the growth of crops and livestock. It is an irreversible trend to resolve an overall manpower shortage in South Korea's rapidly aging agricultural society and help farmers manage their farms more effectively. Government data showed about 46 percent of farmers consist of old people over 70.

(This story is based on an interview conducted by Aju Business Daily reporter Park Sung-jun.)