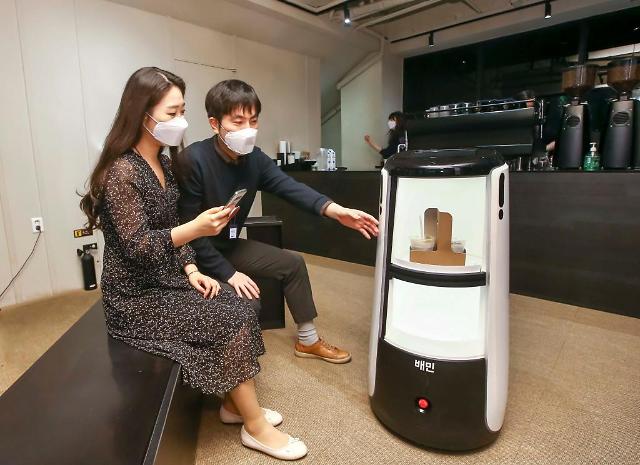 
SEOUL -- An intelligent delivery robot capable of traveling between floors through elevators will make its meaningful debut in June at a 24-story modern commercial and office building stationed by some 4,000 people in central Seoul for a test operation to deliver simple food and drinks from a cafe. A trouble-free operation would open a full-fledged service involving a number of delivery robots and restaurants.

The robot developed by Woowa Brothers, the operator of South Korea's top food delivery service app Baedal Minjok, will be deployed at D Tower, a brand-building built by DL E&C. The robot would deliver food and drinks from a cafe on the first basement floor. Woowa would increase the number of robots and expand its delivery service to other stores if the test operation yields satisfactory results.

Woowa said it would showcase advanced technologies such as a robot control system, which reflects know-how accumulated so far, and verify its ability to carry out delivery tasks even when the service is linked to more than a dozen elevators in a large building with thousands of people.

"Robot delivery is a service that will increase customer convenience and create new delivery demands in the era of non-contact," an unnamed Woowa official said in a statement on May 14. "We hope this cooperation will serve as an opportunity to prove and spread Woowa's advanced delivery robot technology and service management capabilities."

Woowa has tested a self-driving robot capable of traveling between floors that will roam freely through an apartment complex for the delivery of food to the front door of each household. The robot can depart from a restaurant in the apartment's shopping mall, pass through the main entrance on the first floor, and take an elevator to arrive at its destination.

DL E&C, a major builder involved in the construction of many apartments, said that it would expand the use of robots to residential and commercial facilities while designing buildings optimized for utilizing robots by securing various data and working out various service models.

South Korea accelerated the development and commercialization of unmanned delivery services when it was hit by a coronavirus pandemic in 2020. In April, Economy and Finance Minister Hong Nam-ki promised to ease robot-related regulations to realize the early commercial use of self-driving robots at apartments and office buildings ahead of other countries.

Woowa has focused on the development of serving and food delivery robots that have been deployed in controlled environments. Through the accumulation of know-out, the company is confident of commercializing delivery robots that can travel through crowded urban streets and react sensitively to the movements of automobiles, bicycles, children and pet dogs.