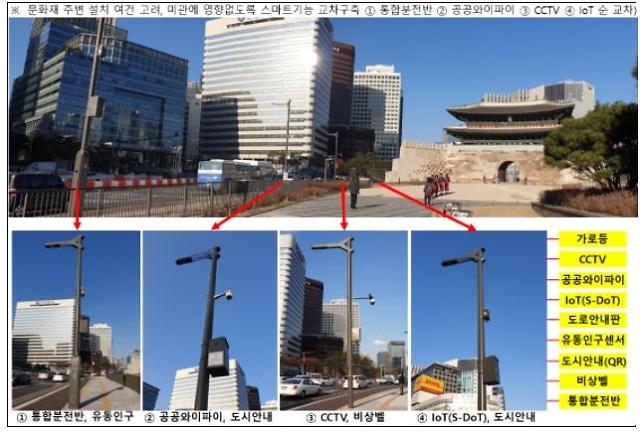 
SEOUL -- After a three-month demonstration, Seoul has chosen to increase the number of smart street poles that would improve the safety and convenience of citizens. Such poles can be used for other purposes such as base stations for lifesaving drones and disaster-monitoring posts.

Seoul City said in a statement on May 19 that up to 190 smart poles would be added to four districts by the end of 2021. Smart poles will be used for protecting the safety of citizens and for creating big data to ease traffic congestions and help business owners attract more customers.

Smart poles can detect abnormal sounds such as people fighting or car crashes. When strange sounds are detected, CCTV cameras will automatically turn its the direction to see what's going on. Seoul said some of the newly installed poles will be able to charge electric vehicles and house stations for lifesaving drones.

All-in-one smart poles are more expensive than conventional structures such as street lights, crossing lights, and CCTVs, but Seoul thinks it will be able to save up to 12 percent in operating costs after all.