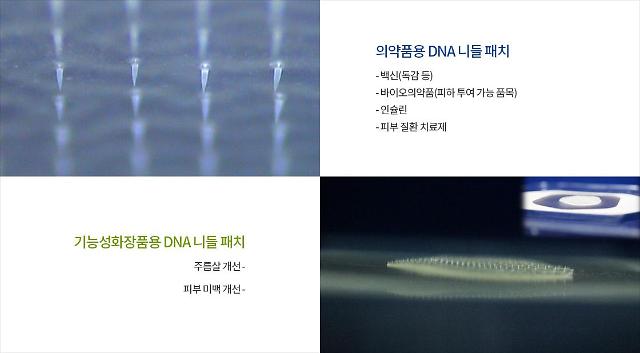 The microneedle patch developed by "ADMBioscience," a company established by the Korea Institute of Machinery and Materials (KIMM), uses double-stranded salmon sperm DNA (SDNA) as a drug delivery vehicle. Nano-sized needles punch small holes in the skin to enable the painless self-administration of drugs such as anti-cancer therapeutics and vaccines. Needles dissolve after they are finished delivering drugs.

KIMM said in a statement on May 27 that the institute commercialized the needle patch by manufacturing a functional cosmetics product that consists of the patch and an ample. "Therapeutic techniques involving microneedles now cover various sectors from drug delivery to disease monitoring," an unnamed KIMM official was quoted as saying.

The patch has 300-micrometer needles made of a material containing SDNA. The cosmetics ample contains both SDNA and gold. ADMBioscience is developing needle patches for the delivery of vaccines and insulin.