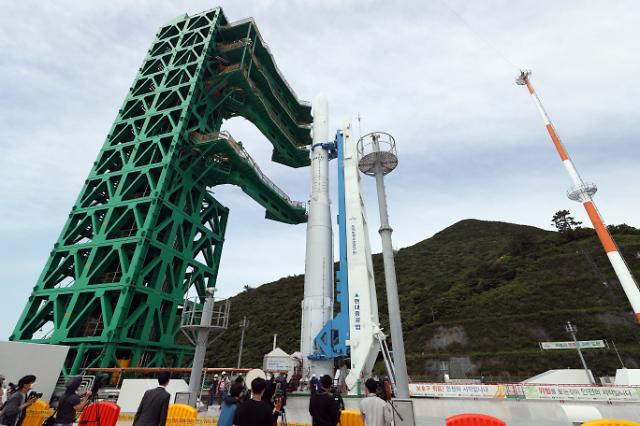 SEOUL -- A new launchpad for South Korea's three-stage space rocket was put into final testing after engineers erected a qualification model at a state space center. Various performance verification tests will be carried out for one month for the launchpad that would be used for an actual flight model in October.

The certification test for the newly constructed second launch pad with a height of 48 meters began at the Naro Space Center in the southern coastal town of Goheung, according to the state-run Korea Aerospace Research Institute (KARI) which is in charge of designing the Korea Space Launch Vehicle-2 (KSLV-2), known as "Nuri."

The first launch pad used for a rocket launch in 2013 was built with Russian technology. The second launch pad was designed independently, based on know-how that South Korean engineers acquired. The two launch pads share the common principles of operation, composition and central public facilities.

"It is meaningful that the send launch pad was built with domestic technology in all processes such as design, manufacturing and demonstration," Koh Jung-hwan, head of KARI's space rocket development operations, told reporters on June 1 when the qualification model of the Nuri was erected on the second launch pad.