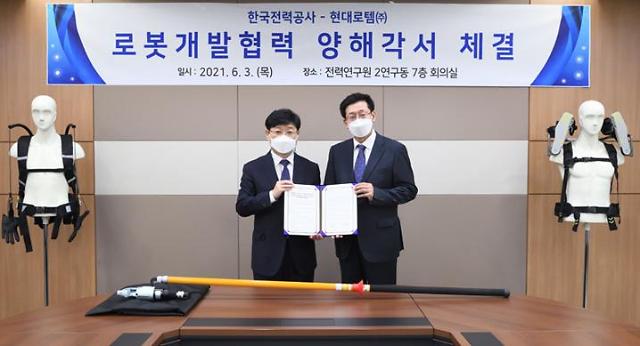 SEOUL -- Hyundai Rotem, a subsidiary of South Korea's s Hyundai auto group, joined hands with a state power company to develop a wearable robot that can help workers get less tired during their indirect live-line work. Unlike ordinary wearable robots that boost the strength of the lower body, Hyundai Rotem's robot will strengthen the upper body so that workers can lift equipment using a lesser force.

A wearable robot uses motors and sensors to detect the movements of limbs and joints. Robotic limbs boost strength and speed and can be used in factories and construction sites. Some countries develop wearable robots for military use.

Hyundai Rotem said in a statement on June 4 that the company signed a memorandum of understanding with Korea Electric Power Corporation (KEPCO) to develop a wearable robot that can be attached to the upper body of a worker and enhance the strength of arms, shoulders, and the back. They will modify a robot developed by Hyundai Rotem.

"We hope to diversify our technologies and products through cooperation in the development of wearable robots for electrical engineers," an unnamed Hyundai Rotem official was quoted as saying. Hyundai Rotem has started the commercialization of vest-type and chair-type wearable robots that were demonstrated at industrial sites.