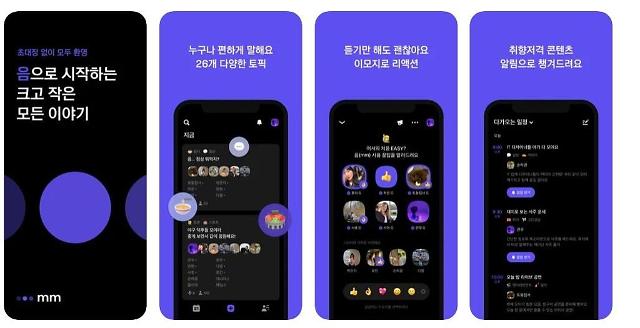 SEOUL -- South Korea's web service giant Kakao has released an audio chat app to attract smartphone users who feel the need to engage in verbal communication with other users who share similar interests. The app is considered the South Korean counterpart of "Clubhouse," an invitation-only social media voice chat app released in March 2020.

South Korean smartphone users' communities were in hype earlier this year thanks to Clubhouse that caught the eyes of people who were in dire need of a sincere chat amid a strict social distancing campaign prompted by a coronavirus pandemic. Public figures such as celebrities and popular entrepreneurs shared their thoughts with random users using voice.

Kakao released "mm," a voice chat social media, through Apple and Google's smartphone app stores on June 7. Users can pick three topics from a total of 26 topics including dating, parenting, food, and music to share ideas and chat with other users. The app is interlinked with Kakao Talk, South Korea's favorite smartphone messenger with some 5.2 million monthly active users.

While Clubhouse added a level of scarcity to its pool of users by operating it as an invitation-only app, Kakao's voice chat app is open for anyone. However, some smartphone chat app users think it may be a little late for Kakao to ride the wave of popularity created by its American counterpart.

"Clubhouse was super-popular at first, but now it is not so popular. I think Kakao should present some killer content to attract users," Park Hee-na, a 41-year-old businesswoman living in Seoul, told Aju Business Daily.