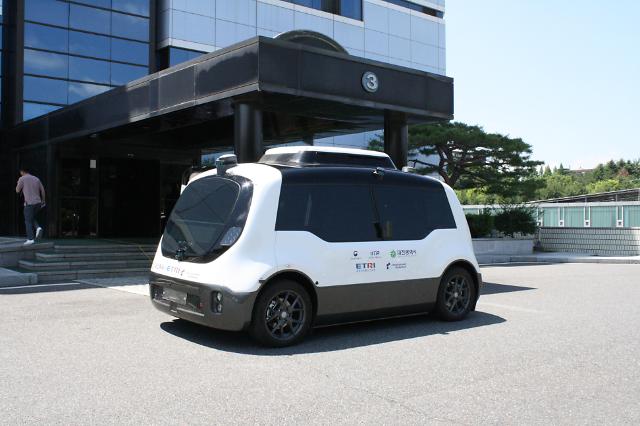 SEOUL -- Researchers will demonstrate an unmanned level 4 autonomous driving shuttle bus inside a research institute campus. The shuttle was based on an electric vehicle manufactured by a domestic small and medium-sized company. It will provide entertainment for passengers using augmented reality and virtual reality content.

Unlike autonomous levels 1, 2, and 3 that assist human drivers to conveniently reach their destinations, level 4 is fully autonomous. A level 4 self-driving vehicle does not require a driver or a steering wheel. It navigates around places by communicating with on-road structures such as traffic lights and pedestrian crossings and other vehicles.

The Electronics and Telecommunications Research Institute (ETRI), a state research institute, said in a statement on June 9 that it will demonstrate "AutoVe," an autonomous shuttle, at the institute's campus in the central city of Daejeon. The 5G-connected shuttle has entertainment features such as augmented reality (AR) and virtual reality (VR) content that is displayed on the organic light-emitting diode (OLED) screen built into the cabin.

AutoVe is equipped with a high-performance artificial intelligence system hooked onto a series of sensors including cameras and lidar. It will travel at a maximum speed of 25 kilometers per hour (15.5 miles per hour) around the campus to pick up passengers at designated digital kiosks. Passengers can tell the shuttle where to go using voice.

ETRI said that its researchers have created 200 terabytes of road environment data through a project that was kicked off in May 2020. The shuttle's driving algorithm will be upgraded and stabilized using the data.