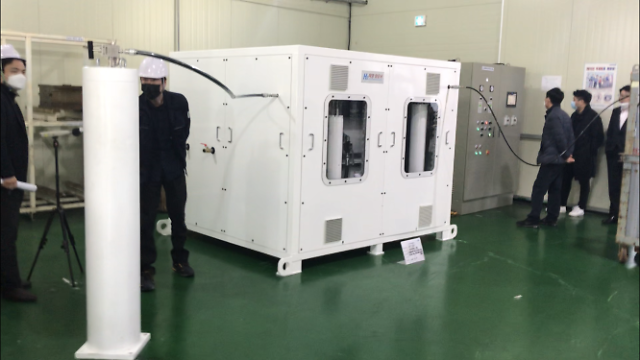 Engineers test an ionic hydrogen gas compressor.[Courtesy of the Korea Institute of Ocean Science and Technology ]

SEOUL -- South Korea's state-run research body has developed a device capable of producing hydrogen by utilizing seawater cells, along with a hydrogen gas compressor based on an ionic liquid piston instead of a metal piston. Ionic compression technology is a high-performance solution that is easy to operate.

The Korea Institute of Ocean Science and Technology (KIOST) said it has developed a seawater cell-based hydrogen production device. With KIOST's technology support, Deokyang Eco, a pump manufacturer in South Korea, has developed an ionic hydrogen gas compressor. As a result, the institute said that hydrogen can be produced 24 hours a day using seawater.

Hydrogen becomes an energy source only after separation and compression. The institute said that the ionic compressor can reduce volume by more than 75 percent compared to a conventional piston compressor. "This technical support is meaningful as a research organization supported the innovation of local companies as well as R&D," KIOST president Kim Woong-seo said in a statement on June 10.

Seawater batteries, which use sodium to generate electricity, can be used at large ships and nuclear power facilities as emergency power sources as they operate without auxiliary loads or an external power supply, except for water and salt.