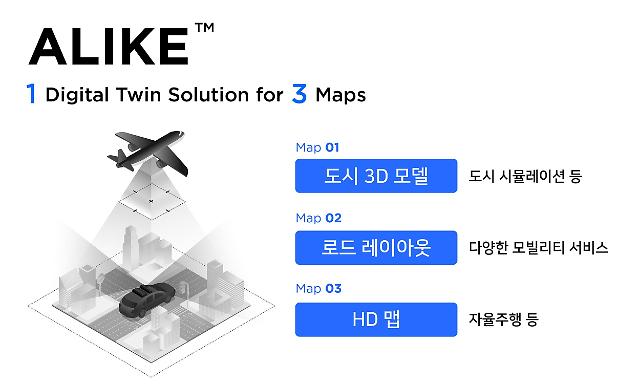 
SEOUL -- The artificial intelligence, robot and autonomous technology wing of Naver has unveiled a solution for the development of digital twins. Developers can conveniently and efficiently create virtual twins of the real world.

A digital twin is literally a digital clone of the real-world original. Sizes of the virtual clone vary from a Petri dish to a whole planet. Digital twins are created to put the clones in different situations such as a city struck by a massive tsunami or a building heavily shaken by an earthquake without damaging the original.

"ALIKE," a digital twin development solution, was introduced by Naver Labs through its news blog on June 10. The virtual cloning solution is specialized in creating digital cities using aerial photographs and high-definition maps. Naver Labs has created a 605-square kilometer-wide three-dimensional map of Seoul with veins of roads and streets using ALIKE's technology.

"We have been upgrading AI technologies such as hybrid HD mapping, HD positioning, and data processing that are needed to create a digital twin based on a mobile mapping system and aerial photographs," Naver Labs' autonomous driving division head Peck Jong-yun was quoted as saying.