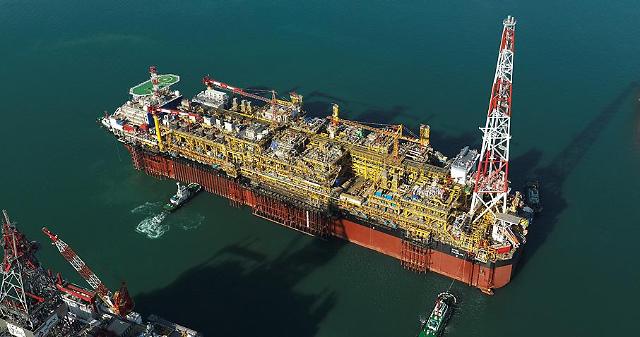 
SEOUL -- Saipem, an Italian engineering company, teamed with South Korea's Daewoo shipyard to win an order worth 2.6 trillion won ($2.3 billion) for the construction of a floating production storage and offloading (FPSO) unit that will be delivered to Brazil's energy company Petrobras in the second half of 2024.

Daewoo Shipbuilding & Marine Engineering (DSME) said it would build the hull capable of storing crude oil and part of the superstructure. Saipem will build the superstructure of the FPSO unit to be deployed at the Buzios field off the coast of Rio de Janeiro. DSME's share amounts to 1.09 trillion won.

With the new deal that came after the shipbuilder won a 200 billion order for the hull of a semi-submersible oil production facility in 2019, DSME's total orders rose to $3.72 billion, or 48.3 percent of this year's target of $7.7 billion. It marked DSME's biggest offshore plant order since it received an order worth three trillion won to build an oil production facility in 2014.

"We anticipate additional orders in the future as the market for oil production facilities is expected to gradually recover due to rising oil prices," an unnamed DSME official said in a statement on June 14.

A protracted business slump and fierce competition with Chinese rivals forced the sweeping restructuring of South Korean shipbuilders. In 2018, Hyundai Heavy Industries, the world's largest shipyard, closed its dockyard for offshore plants. Since then the industry has seen a gradual recovery led by gas-fueled ships.