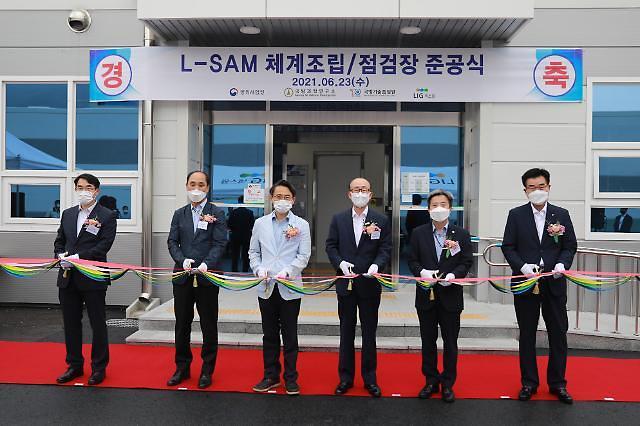 The opening ceremony took place on June 23 in Gimcheon, about 170 kilometers (105 miles) southeast of Seoul. "We will do our best to ensure that the L-SAM system assembly and inspection center successfully plays the role of the cradle for the development of state-of-the-art domestic weapons," LIG Nex1 CEO Kim Ji-chan said.

The L-SAM system, based on the Russian S-400 technology, is an upper-tier interceptor to offer capabilities similar to that of the Terminal High Altitude Area Defense (THAAD) system, an advanced missile shield deployed by American troops in South Korea. The L-SAM system consists of a ballistic missile interceptor and an aircraft interceptor, along with control stations, radars and launchers.

The total development cost of L-SAM is estimated at 1.1 trillion won ($974 million). Hanwha is responsible for a missile interceptor and LIG Nex1 develops an aircraft interceptor.

A low-tier missile defense system has been almost completed. The Cheolmae-2 (Cheongung) middle-tier missile defense system, which can intercept targets at an altitude of up to 40 km, has been compared to American Patriot systems. A complete battery consists of up to six transporter erector launchers, an X-band 3D radar, and a fire command vehicle. Cheongung is a surface-to-air missile (SAM) system developed with technical support from Russia's Almaz-Antey and Fakel.