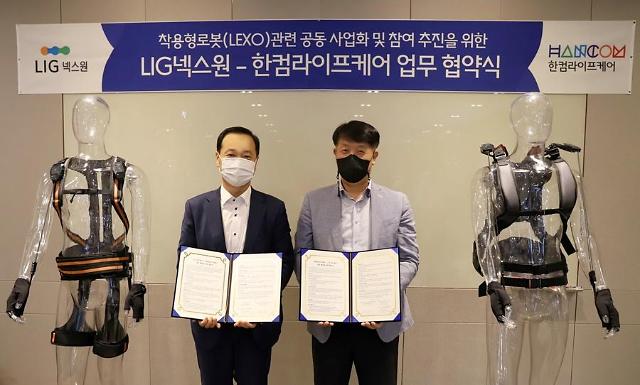 SEOUL -- LIG Nex1, a defense contractor involved in the development of radar and missile guidance systems in South Korea, partnered with a domestic safety equipment maker to develop an exoskeleton suit-type wearable robot that can be used for industrial and military purposes. The robot will be first marketed for firefighters and public servicemen.

Exoskeleton suits are attached to the limbs of human workers to increase their strength and endurance. Robotic limbs fitted with servo motors detect the movement of joints and body parts to reinforce the movement. A worker wearing an exoskeleton robot can lift heavy objects and travel long distances on foot.

LIG Nex1 said it has signed a cooperation agreement with Hancom Lifecare for the joint research and marketing of LEXO, a wearable robot brand. The defense contractor has acquired LEXO's core technologies such as a pneumatic power pack, control algorithms, sensors and processors. "This agreement will promote the development of wearable robots that meet market needs," Hamcom Lifecare CEO Woo Joon-seok said in a statement on July 5.

LIG Nex1 would create new market opportunities by combining the know-how and infrastructure of Hancom Lifecare. "We hope to raise the public recognition of wearable robots that are widely researched around the world and increase their adoption in various fields including lifesaving, military, rehabilitation, and elderly care," said LIG Nex1's research and development division head Kang Dong-seok.