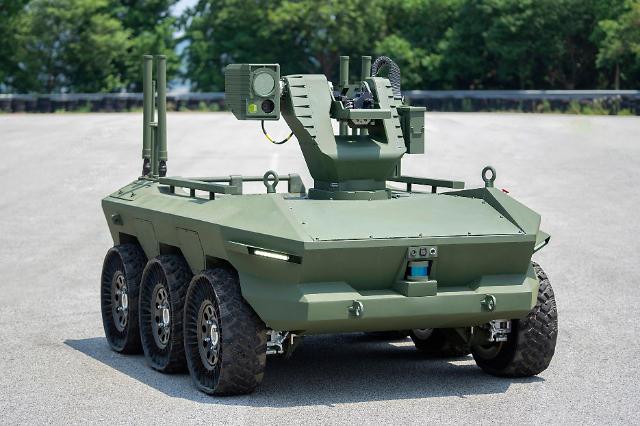 
SEOUL -- For a six-month military test operation, Hyundai Rotem, a subsidiary of South Koreas Hyundai auto group, has delivered two multi-purpose unmanned ground vehicles that weigh two tons and are capable of carrying supplies, searching battlefields and evacuating patients. It is the first unmanned vehicle to be introduced by South Korean troops.

Hyundai Rotem said in a statement on July 7 that two multi-purpose unmanned ground vehicles (UGVs) have been delivered through the Defense Acquisition Program Administration (DAPA), a state arms procurement agency controlled by the defense ministry. With day and night cameras, driving and surveillance images can be checked in real-time through separate monitors from a long distance. Unmanned driving capabilities support various modes such as follow-up, remote driving, and the autonomous driving of route points.

The upper front of the six-wheeled UGV is equipped with a remote-controlled weapon station, which allows remote attacks and self-defense missions, and its back has a loading box capable of carrying more than 200 kilograms of cargo or transporting patients in case of an emergency. All six wheels are equipped with an in-wheel motor, allowing each wheel to exert independent driving power.

Hyundai Rotem's UGV is based on HR-Sherpa, a six-wheeled model that features an electric drive system, a 360-degree rotation function, a skid steering system and airless tires for rough driving. HR-Sherpa, which is 2.4 meters long, can run at a maximum speed of 30 kilometers (18 miles) per hour. A water-cooled battery system and an integrated heat management system enable long-distance driving and all-season weather operations.

DAPA has pushed for the introduction of various unmanned vehicles. Hyundai Rotem has been selected for a separate military project to develop technologies that can remotely operate unmanned mobile combat systems such as tanks, armored vehicles and self-propelled guns.

In April, a six-wheeled unmanned surveillance vehicle (USV) capable of carrying out reconnaissance missions or tracking a single target precisely on mountain roads will be deployed for cavalry units in 2027. A prototype developed by the state-run Agency for Defense Development (ADD) and defense companies such as Hanwha Defense has passed a test for operational performance and suitability for military use.

The USV is armed with a machine gun mounted on a remote-controlled weapon station. The platform can be reconfigured conveniently for other missions with the installation of different equipment like a detection device and drone for communications relay.