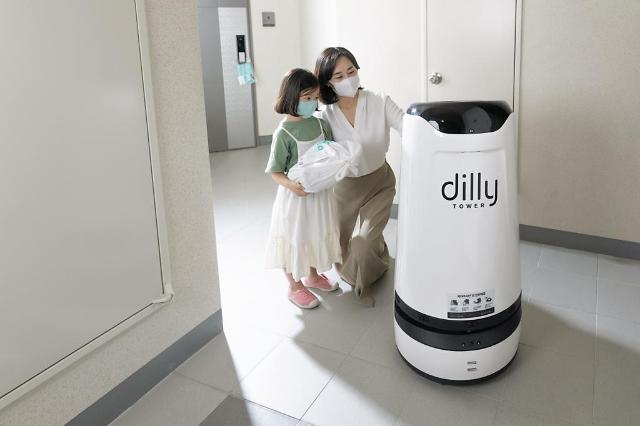 
SEOUL -- An indoor food delivery service using self-driving robots capable of traveling between floors through elevators made its commercial debut at a new residential building in South Korea, two years after the first pilot operation began in a commercial building.

Three robots developed by Woowa Brothers, the operator of South Korea's top food delivery service app Baedal Minjok, were deployed at a 30-story residential and commercial complex with 293 households in a southwestern district in Seoul. The loading space was divided into two upper and lower sections to accommodate up to 20 kilograms.

Woowa's robots deliver food to the front door of each household if delivery men bring goods ordered through an app to the first floor and enter phone numbers on the screen of robots. They can open a joint front door through wireless communication, call an elevator, and move between floors. At the front door, robots make a call and send a message so that customers can receive goods by entering their phone numbers.

Hanwha E&C has eliminated door sills and established automatic doors so that the delivery robot using a one-pass key can move freely. "It will provide a safe and convenient non-face-to-face delivery service to residents and provide more opportunities to delivery men by reducing delivery time," Woowa's robot business head Kim Yo-seob said in a statement on July 12.

For the use of delivery robots at office buildings, Woowa is testing a robot service at a 24-story modern commercial and office building in central Seoul and verify its ability to carry out delivery tasks even when the service is linked to more than a dozen elevators in a large building manned with thousands of people.

Woowa's final goal is to produce robots capable of roaming freely through the crowded urban streets. However, the development of delivery robots has been slow because they are not useful in real life in a country where many city dwellers live in high-rise apartment buildings.

Woowa joined hands with Hyundai Elevator, the largest elevator and escalator producer in South Korea, to commercialize a system linking elevators and robots. Dilly Tower, an autonomous service robot capable of traveling between floors, has been tested in limited environments.

Dilly Tower, linked to automatic doors and elevators, moves on its own to customers. It sends text messages. The robot can move 1.2 meters per second, overcome up to 2.2 centimeters of a raised spot and automatically slow down in narrow passages or on uneven roads. The battery lasts six hours and is automatically charged when waiting.