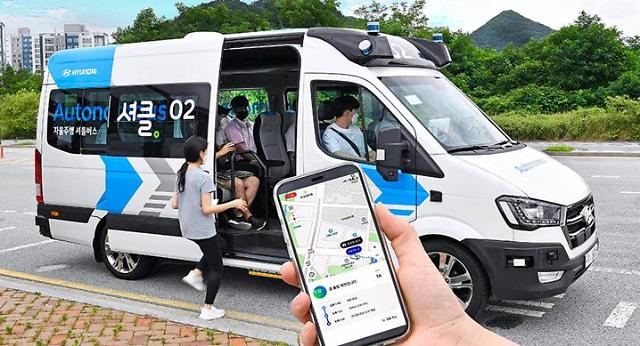 
SEOUL -- South Korea's Hyundai auto group will launch a two-month pilot operation of its "Robo Shuttle" service powered by autonomous driving and artificial intelligence technology in the central city of Sejong as part of a smart city project. The service will be gradually expanded to other regions.

The demand-responsive, high-occupancy vehicle service will begin on August 9 along a 6.1-kilometer route with 20 stops in Sejong, using a van applied with a range of level 4 self-driving technologies, the auto group said, adding the vehicle can perceive its surroundings, make decisions, and control itself, requiring minimal intervention from a safety driver.

The vehicle has obtained a temporary operation permit of level 3 autonomous driving. Unlike autonomous levels 1, 2, and 3 that assist human drivers to conveniently reach their destinations, level 4 is fully autonomous. A level 4 self-driving vehicle does not require a driver or a steering wheel. It navigates around places by communicating with on-road structures such as traffic lights and pedestrian crossings and other vehicles.

The program will operate in collaboration with Shucle, a short-distance ride pooling community service that has been launched by Hyundai in Sejong. Using an exclusive app, passengers can call up an 11-seater Shucle van and get on and off at any place they want. Shucle vans have no fixed routes. Artificial intelligence analyzes traffic conditions and finds the best route.

The Shucle service was designated as demand-responsive transport (DRT), a form of shared private transport for groups. An internal camera recognizes the head shape of a passenger and determines whether the passenger sits at a designated seat.

When requested by a passenger via the Shucle app, the self-driving Robo Shuttle will head to the pick-up point by calculating the best path using AI algorithms. Passengers will be recruited through the Shucle app.