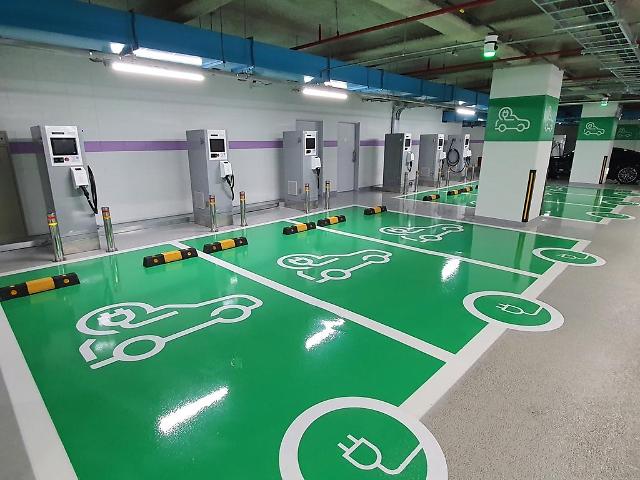 SEOUL -- An electric vehicle charging station that can rapid-charge up to 23 cars simultaneously has kicked into operation in Seoul. The fast-charging platform is South Korea's largest and can charge up to 80 percent of a vehicle in less than an hour.

There are some 135,000 electric vehicles (EVs) registered in Seoul as of January 2021. However, the charging infrastructure is insufficient with some 8,400 chargers. Charging stations are set up in underground parking lots of large downtown buildings and apartments but they normally have two or three chargers each.

WTC Seoul, the financial management company of the World Trade Center Seoul in the district of Gangnam, the heart of finance and fashion trends, said in a statement on July 26 that it has opened a fast-charging station equipped with 23 rapid chargers in the underground parking lot of the trade center.

The management company said that about 30 slow chargers will be added later this year. It takes about seven hours to fully charge an EV using a slow charger. The trade center's charging station is available 24 hours a day, and customers will receive a parking fee discount for one hour.

Provincial governments, power companies, and private companies are accelerating the establishment of charging stations. Seoul City said in June that about 5,000 more EV chargers would be set up by the end of 2022. The city government is also providing subsidies for EV owners who wish to install chargers at their homes.