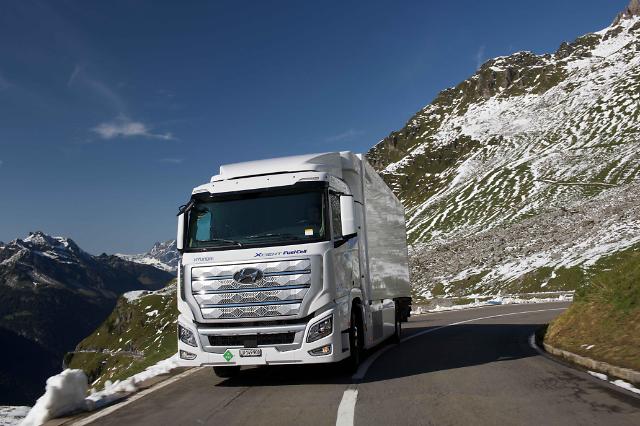 SEOUL -- South Korea's Hyundai auto group secured a solid bridgehead for the distribution of its heavy-duty trucks powered by hydrogen in the United States by gaining the support of California funding agencies and local communities to demonstrate an upgraded model called "Class 8 XCIENT Fuel Cell" with a maximum driving range of about 800 kilometers (497 miles).

Hyundai's 30 demo trucks will be deployed to northern California by the second quarter of 2023. The U.S. model is capable of storing hydrogen in greater quantity in tanks than Hyundai's fuel cell trucks which have proven their commercial viability through more than one million kilometers of driving since they debuted in Switzerland in 2020. The U.S. model's maximum gross combination weight will be more than 37 tons.

A consortium led by the Center for Transportation and the Environment (CTE) and Hyundai Motor has won $22 million in grants from the California Air Resources Board (CARB) and the California Energy Commission (CEC) and $7 million in additional grants from the Alameda County Transportation Commission and the Bay Area Air Quality Management District.

"These investments will support zero-emission trucks and infrastructure development and deployment as part of the US market ecosystem," Hannon Rasool, deputy director of CEC's fuels and transportation division, said in a statement on July 27. The consortium plans to establish a high-capacity hydrogen refueling station in Oakland, California that will be able to support as many as 50 trucks with an average fill of 30 kilograms.

Hyundai was also awarded a $500,000 grant from the South Coast Air Quality Management District to demonstrate two trucks in Southern California. Hyundai Motor and its fleet partner would begin operating the trucks in August. They will be used for long-haul freight operations between warehouses in southern California for a 12-month period.

Hyundai will strive to establish hydrogen value chains with local partners by introducing diverse commercial vehicle lineups powered by hydrogen. By 2030, Hyundai aims to sell 25,000 fuel cell trucks in Europe, 12,000 in the United States and 27,000 in China.

Hyundai has modified its Xcient truck to produce a fuel cell model capable of delivering a travel range of about 400 km on a single charge. Hyundai is working on an upgraded model capable of traveling up to 1,000 km on a single charge. Hyundai has partnered with Cummins Inc., an American engine maker, to develop electric and fuel cell powertrains initially for the North American commercial vehicle market and explore ways to develop next-generation fuel cell systems.