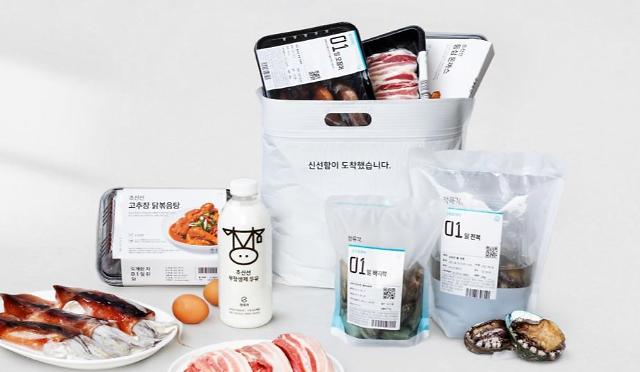 Jeongyookgak places more importance on taste than looks and utilizes special packaging techniques that can minimize the amount of oxygen inside the meat. Products can be stored at a constant temperature until consumers receive them.

Data released by mobile survey platform Open Survey in 2020 showed that online sales of fresh foods jumped from 26.7 trillion won in 2019 to 43.4 trillion won in 2020 as a coronavirus outbreak forced many people to cook at home instead of dining out.

Naver said in a statement on August 1 that the company has participated in Jeongyookgak's series C financing round. "The investment was part of Naver's plan to strengthen the distribution of fresh products," an unnamed Naver official was quoted as saying.

Naver Smart Store, an online shopping service run by Naver, offers an online platform that connects some 420,000 store operators and some 7.2 million monthly active users. Despite the massive size of its online marketplace, Naver does not offer one-day or overnight delivery services because it does not own a cold chain, while other online shopping giants own their own nationwide cold chain networks.

A cold chain is a logistics system involving refrigerated warehouses and freezer trucks. The cold chain system is vital for the delivery of fresh goods including meat, vegetables, fruit, and other perishable goods. According to an online survey of 400 consumers, conducted by Yonsei University in July 2021, meat is one of the most popular products delivered through overnight deliveries.
© Aju Business Daily & www.ajunews.com Copyright: All materials on this site may not be reproduced, distributed, transmitted, displayed, published or broadcast without the authorization from the Aju News Corporation.