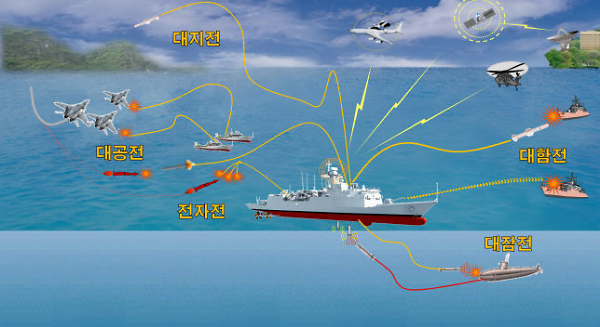 [Courtesy of the Agency for Defense Developmet]


SEOUL -- South Korea's defense procurement agency endorsed a military scheme to go ahead with the home-made construction of next-generation frigates with improved anti-aircraft detection capabilities and viability. The project requires about 3.51 trillion won ($3.07 billion) from 2023 to 2032.

The Defense Acquisition Program Administration (DAPA), a state arms procurement agency controlled by the defense ministry, said it has approved the FFX Batch-Ⅳ program. Details such as design were not disclosed.

In May, a 2,800-ton frigate armed with anti-submarine and tactical guided missiles was launched at the shipyard of Daewoo Shipbuilding & Marine Engineering. It was the fifth FFX Batch II frigate which is 122 meters long, featuring a hybrid propulsion system to reduce underwater radiated noise and a towed array passive sonar system.

South Korea has stepped up the construction of frigates with enhanced war capacities following the sinking of its Pohang-class corvette, Cheonan, on March 26, 2010, near a front-line island in the Yellow Sea that killed 46 seamen. International experts concluded that Cheonan had been sunk by a North Korean torpedo.