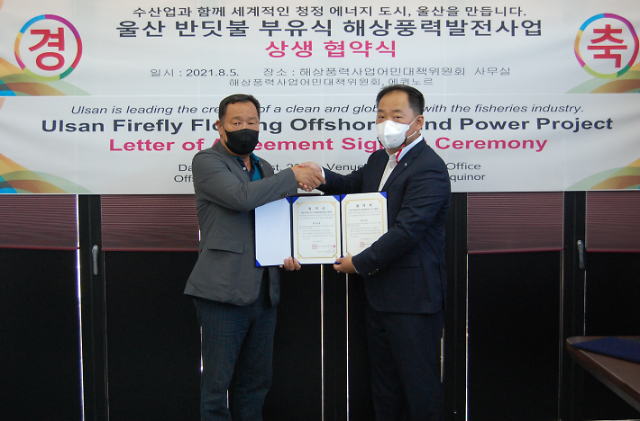 
SEOUL -- Equinor, a Norwegian state-owned multinational energy company, has cleared an important obstacle that may hamper the construction of a floating offshore wind farm in South Korea by securing consent from fishermen who have shown a cynical response to the emergence of huge power generation structures in fishing zones.

As part of its green energy campaign to expand the use of renewable energy, South Korea is actively pushing for offshore wind farms. Compared to fixed offshore wind farms which are generally installed in shallow waters, floating wind turbines located in deep waters can reduce visual pollution, provide better accommodation for fishing and shipping lanes, and reach stronger and more consistent winds.

Floating wind farm systems do not require as much space as other clean energy power generation facilities. However, fishermen think that offshore wind farms would curtail their operating radius. They also believe electromagnetic fields generated from high-voltage submarine cables could obstruct the spawning and migration of fish stocks, although studies show that there is at present limited evidence that electromagnetic fields generated by offshore windmills affect marine habitats.

With full support from central and regional governments, Equinor is involved in the construction of two major floating wind farms off the southeastern industrial port city of Ulsan. The company's so-called "Firefly" project is aimed at installing an 800-megawatt wind farm by 2026.

Equinor's branch in South Korea said in a statement on August 6 that the Norwegian company has signed a win-win cooperation agreement with an association of regional fishermen to form a consultative body on how to compensate and cooperate in winning state permission for the firefly project. The company is operating Hywind Scotland, the world's first commercial floating offshore wind farm commissioned in 2017 off the coast of Scotland.

The Seoul government has promised to localize technologies related to floating offshore wind farms. In November 2020, an all-star team involving 15 domestic and foreign companies was formed to secure core technologies and develop a competitive model. In May this year, a project led by Korea National Oil Corp. (KNOC), a state company, to turn a useless gas platform into a floating wind farm base passed a preliminary feasibility study conducted by a national think tank.