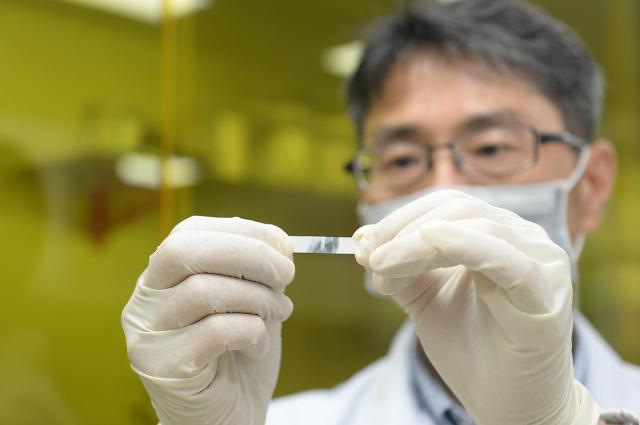 SEOUL -- Researchers have developed a transparent, stretchable high-polymer film material that turns completely white to have zero light transmittance when it is stretched out. The technology can be used for the development of a color-changing "chameleon film."

There are very few transparent films that can turn white or change their color available. However, such films use nanoparticles or other substances that are reactive to light or impact. They are used to control the brightness of display panels and wearable devices like smartwatches. Many conventional films are made of a photocuring polymer that changes its hardness depending on the strength of luminosity.

The Electronics and Telecommunications Research Institute (ETRI) said in a statement on August 11 that its researchers have developed a technology that can create the color-changing transparent high-polymer film. The newly-developed film uses light to chemically bond a polymer and a catalyst. Researchers said the technology can be applied to the development of films capable of changing colors like a chameleon.

ETRI's elastic film is the size of a large coin and can be stretched up to 130 percent of its original size to have zero light transmittance and become transparent again when it shrinks back to its original size.

"The key success of this development is the finding of the film's microscopic cavities that cause refraction," ETRI said. "We predict that camouflage uniforms and fashion dresses that change color in real-time can be developed in the future."

The film can be easily commercialized because its production process is almost identical to any other high-polymer product. The institute said the high-polymer film technology will be transferred to domestic display makers and high-polymer makers.