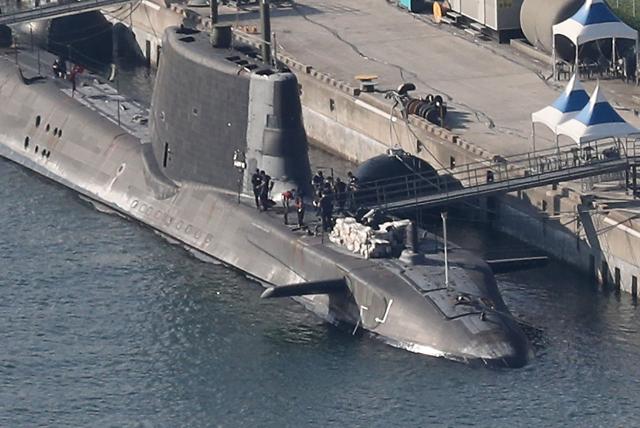 Britain's nuclear-powered submarine HMS Artful is docked at a military pier in the southern city of Busan on August 12. [Yonhap News Photo]

SEOUL -- Britain's nuclear-powered submarine HMS Artful has been docked at a military pier in South Korea's southern port of Busan ahead of a port call by the Royal Navy's aircraft carrier HMS Queen Elizabeth and its strike group in late August. Sailors were to go through quarantine measures such as COVID-19 testing during their stay in South Korea.

The submarine is docked in the port of Busan for the loading of munitions and the rest of its crew, South Korea's defense ministry said, adding South Korean authorities are taking COVID-19 quarantine measures. British Secretary of State for Defense Ben Wallace has confirmed that crew aboard the carrier strike group's four ships had tested positive for the virus.

The HMS Queen Elizabeth fleet has set sail for its operational deployment to the Mediterranean, the Indian Ocean and the Asia-Pacific. The fleet has conducted joint exercises with India and Singapore and made a port call to the Pacific island of Guam. After visiting Busan, the aircraft carrier is to visit Japan in September.

"Regarding the aircraft carrier fleet, the two countries are discussing a detailed schedule for its entry into the port," Defense Ministry spokesman Boo Seung-chan told reporters on August 12. He said earlier that the port call could open discussion on defense cooperation. There have been military ties between South Korea and Britain, especially in the maritime defense industry. Britain has extended technical cooperation for South Korea's military project to build submarines.