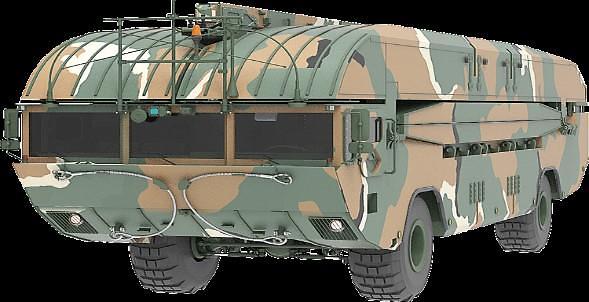 
SEOUL -- With technology transfer from a foreign company based in Germany, Hanwha Defense, a key defense contractor in South Korea, will produce a new type of self-deployable military equipment that can be used as a bridge or as a ferry to transport weapon systems, troops and supplies over water when permanent bridges are not available.

Hanwha Defense, known for high-performance amphibious assault vehicles and self-propelled guns, has been selected by the Defense Acquisition Program Administration (DAPA), a state body controlled by the defense ministry, to lead a 500 billion won ($424 million) project aimed at producing the localized version of the M3 Amphibious Rig, which is a self-propelled, amphibious bridging vehicle.

The M3 rig, developed by General Dynamics European Land Systems (GDELS), offers high mobility and can be handled by a crew of just two soldiers. It has been deployed in many countries. During the NATO Anakonda 2016 exercises, a combined German and British Army engineer unit operated the longest M3 floating bridge ever assembled. The 350 m long bridge was put together in only 35 minutes, enabling NATO forces to cross the Vistula River in Poland.

Hanwha Defense said it would produce a lightweight South Korean model called "M3K." In a statement on August 17, CEO Sohn Jae-il voiced confidence over the development of M3K, citing the company's accumulated experience in developing and producing amphibious combat equipment for more than 30 years.

Hanwha Defense aims to produce a 28-ton model which is operable on the soft ground without a separate recovery device. it will be designed with a lightweight hull and a four-wheeled structure to reduce water resistance and maximize safety on the water. The company said that M3K would feature a maximum speed of 70 kilometers per hour (62 miles) on the land and 10km on the water.

The survival of soldiers can be improved with bulletproof function and CBR (chemical, biological, and radiological) protection in the crew room, Hanwha Defense said, adding secondary functions would include tire pressure control and axle height adjustment.

Hanwha Defense will use technologies obtained through the development of M3K to improve the performance of South Korea's old wet-gap crossing equipment called the U.S. Ribbon Bridge System (RBS), which is a modular, aluminum-alloy, and continuous floating bridge system consisting of interior and ramp bays.