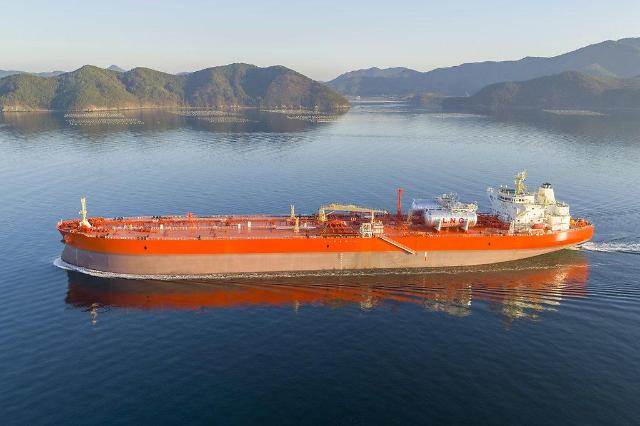 Samsung Heavy Industries (SHI) said that with DNV's "Approval in Principle," the shipbuilder would provide effective solutions to shipping companies trying to remodel ships. The shipbuilder aims to commercialize an ammonia-powered oil tanker in 2024.

"The global shipbuilding and shipping market faces an important time to prepare for carbon neutrality," SHI's technology development division head Chung Ho-hyun said in a statement on August 19. "We will focus on research and development so that eco-friendly technologies such as ammonia and fuel cells developed by Samsung Heavy Industries can play a central role in paradigm changes."

For the development of an ammonia-powered ship, SHI has teamed up with foreign partners including Malaysian shipping company MISC and MAN, a German ship engine manufacturer. In September 2020, an ammonia-powered Aframax oil tanker which is under development in a multi-national project led by SHI, acquired basic certification from Lloyd's Register, a London-based maritime classification society. An Aframax tanker has a deadweight between 80,000 and 120,000 metric tons.

Ammonia is a compound of nitrogen and hydrogen. Though common in nature, it is both caustic and hazardous in its concentrated form. The advantage of ammonia used as fuel is that it contains no carbon but it needs pilot fuel for combustion. The International Energy Agency (IEA) predicts that the use of ammonia and hydrogen for ship fuel will gradually increase.

Compared to other alternative fuels, ammonia is seen as a more suitable ship fuel for the post-carbon era due to its stability in supply and relatively easy storage and transportation. Ammonia requires less storage volume than hydrogen and is cheaper to make than synthetic carbon fuels.