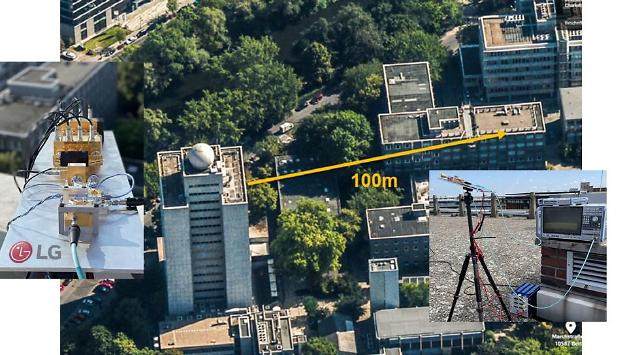 
SEOUL -- LG Electronics, a major home appliance and smartphone maker in South Korea, has worked with German researchers for the successful demonstration of transmitting communication signals more than 100 meters by utilizing the 6G Terahertz frequency band that includes an enormous amount of available spectrums. Terahertz (THz) is a unit of frequency defined as one trillion cycles per second.

The demonstration was conducted at the Fraunhofer Heinrich Hertz Institute, an organization of the Fraunhofer Society based in Berlin. LG Electronics and Fraunhofer jointly developed a power amplifier that outputs communication signals stably in the 6G THz band. LG said the amplifier has raised its output signal to the world's highest level.

6G has a shorter transmission distance than 5G. Base stations should be built more closely than 5G to eliminate shaded areas. Because 6G is five times faster than 5G, scientists say it will open a completely new era. Researchers at the University of Oulu think the future-generation mobile network can transfer terabits per second, creating near-instant microsecond connectivity between societies.

For their demonstration, LG and Fraunhofer have developed "adaptive beamforming" that converts beam direction according to changes in channels and receiver position as well as "high-gain antenna switching" that transmits multiple output signals to antennas. "With the success of this demonstration, we are one step closer to the upcoming 6G era," LG's chief technology officer Park Il-pyeong said in a statement on August 19.

In a bid to secure an early lead in the development of 6G technologies, LG has teamed up with the state-run Korea Advanced Institute of Science & Technology (KAIST) and Keysight Technologies, an American manufacturer of electronics test and measurement equipment and software, to develop THz-related source technologies and establish a verification system. Keysight has provided design and test tools.

As a frontrunner in disseminating 5G mobile services, South Korea aims to achieve the world's first commercialization of 6G mobile telecommunication in 2028. The Ministry of Science and ICT Minister unveiled a five-year state project to develop core technologies for 6G telecommunication. Some 127 billion won ($112 million) would be spent on implementing terabyte (Tbps)-class transmission speed.