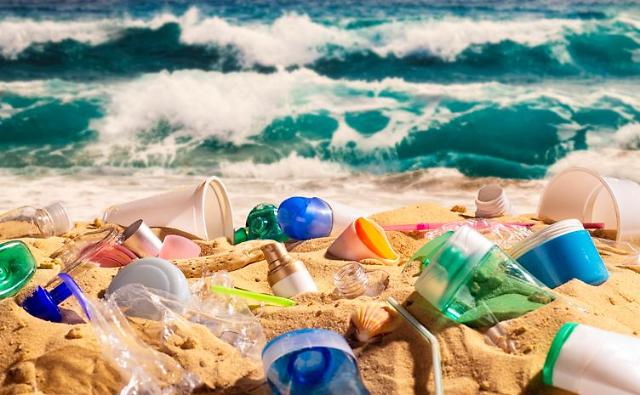 SEOUL -- SKC, a leading polyester film and chemical material manufacturer in South Korea, will kick-start the commercialization of a pyrolysis plant in the southern port city of Ulsan to produce fuel using waste plastics. The commercialization project will be jointly carried out with Japan's recycling energy company Kankyo Energy.

The pyrolysis technique uses extreme heat and pressure to break down plastics and convert them to oil. Recycled oil is processed into medium crude and light oil to be used in the production of lubricants and other fuels.

SKC affiliated with South Korea's third-largest conglomerate, SK Group, said in a statement on August 26 that the company will embark on the construction of a pilot pyrolysis facility in Ulsan some 300 kilometers (186 miles) southeast of Seoul. The blueprint for the facility using Kankyo's pyrolysis technology will be finished in August and go fully operational by the end of 2023.

"We will accelerate the commercialization of pyrolysis technology through a Japanese partner who has advanced technologies," SKC said, adding that the chemical material maker would target the global market with its waste plastics recycling technology.

When the facility is commercialized, about 50,000 tons of waste plastics will be used to create some 35,000 tons of oil. Recycled oil will be used as boiler fuel for a chemical plant operated by SK Group. SKC partnered with Kankyo in June 2021 to cooperate in the development of pyrolysis technology and facilities.

The pyrolysis technique is widely researched in South Korea with a waste recycling rate of about 86 percent in 2019. In July, the southern port city of Tongyeong revealed a plan to build a pyrolysis center that will recycle ocean waste including fishnets and discarded buoys made of plastic, Styrofoam and vinyl.