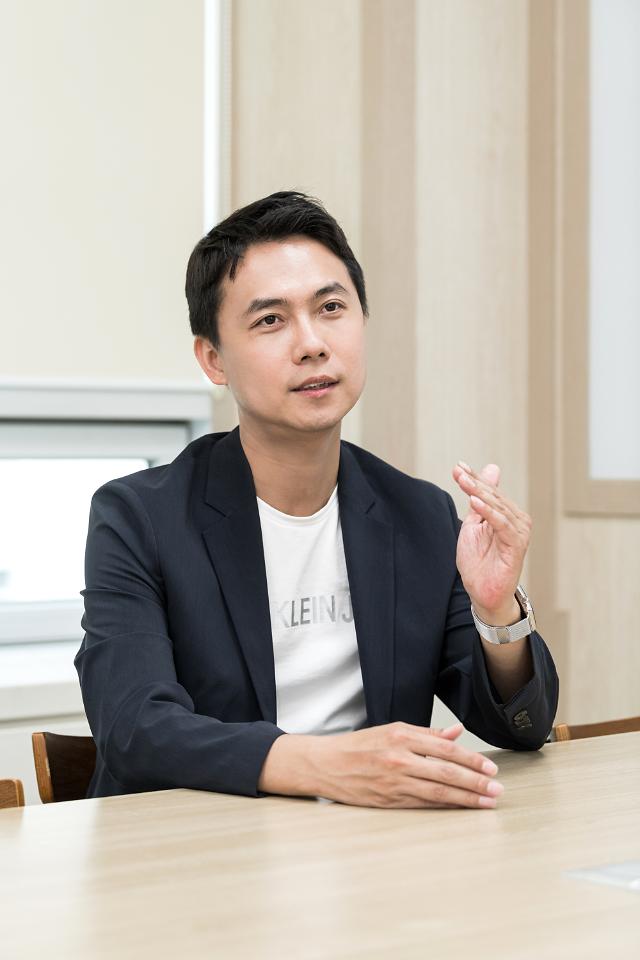 
SEOUL -- As a leading conversational artificial intelligence startup specialized in deep learning and video synthesis in South Korea, Deepbrain AI expressed confidence in its goal to become a global player based on proven technologies in synthetic humans that respond to natural language questions, as well as a steady inflow of capital from investors.

Founded in 2016, Deepbrain provides video and speech synthesis and chatbot solutions, along with AI kiosks and conversational solutions that can be used in various industries for optimized customer services. To create an AI human, the startup captures video of a human model in a studio and trains a machine learning system that generates an avatar with synchronized lip, mouth and head movements.

"AI human technology has infinite potential for expansion, so it can be used in various industrial fields," CEO Eric Jang said in an interview with Aju Business Daily. "My goal has been to become the largest AI company in the world since I started my business," he said, buoyed by a series of contracts with corporate clients.

Deepbrain vowed to actively push for overseas expansion from the second half of this year, starting with contracts with two Chinese broadcasters based in Beijing and Qinghai to export AI announcers created through deep learning technology. Jang has established branches in Beijing and Shanghai to tap the Chinese market. Discussion is underway with Chinese banks on introducing AI kiosks and counselors.

"With these contracts, we will try to become a global company by looking for business opportunities with various companies in foreign markets," Jang said with a particular emphasis on the United States. For its entry into the U.S. market, Deepbrain would seek to forge a strategic partnership with Veritone, a U.S. AI tech company, establish a local branch in California and provide a service explaining products in Amazon, the world's largest online shopping mall.

"We want to make this year the first year of full-fledged global expansion and grow into a global unicorn company within two years at the earliest," Jang said, pointing to Deepbrain's rapid growth spurred by differentiated competitiveness in "lip-sync image synthesis" technology that uses deep learning to synthesize lips.

Very few companies can implement realistic AI humans. Deepbrain's technology can implement facial expressions, dialogue intelligence, and emotions that are similar to those of a real person. "The most important technology when implementing artificial humans is lip-synced image synthesis technology that matches the shape of lips with what is said."

Deepbrain's corporate value has soared to 200 billion won ($171 million) in five years, attracting abundant capital from investors. Various industries such as finance, education, and media are now adopting Deepbrain's interactive AI technologies. "We are still growing with a lot of domestic capital," Jang said, promising to offer SaaS (Software as a Service), a software delivery model in which a cloud-based software application is licensed to a user.

Like other startups, Jang had experienced difficulties securing investment at the beginning, but he is now upbeat over the growth of his company and vowed to show "success stories" based on the use of AI image synthesis technologies in the fields of broadcasting, movies, medical care, and commerce.

"We will use our investment to quickly secure talent and expand our business globally," Jang said, attributing his success to bold investment in recruiting talent and improving the welfare of employees. "The implementation of world-class AI technology was possible because of excellent developers," he said, unveiling the ideal of recruiting more than 100 people who will work at home and in overseas branches.

Unsatisfied with the growth he has achieved so far, Jang will explore a new business opportunity in the emerging metaverse market. The metaverse is a collective virtual shared space created by the convergence of virtually enhanced physical reality and physically persistent virtual space. An alliance of private companies, broadcasting networks, research organizations and state bodies was launched in May to support the production, testing and demonstration of services in the fields of manufacturing, healthcare, construction, education, distribution and defense.

Unlike existing metaverse platforms, Jang hopes to develop technologies that can implement more realistic and highly intelligent avatars. "It is one of the most important tasks. Unlike current metaverse platforms that use cute 3D characters, our goal is to implement an avatar similar to the actual face (like a virtual human)."

To address concerns about deep fakes, or AI-generated videos that take a person in an existing video and replace them with someone else's likeness, Deepbrain would develop technology that can detect fakes and provide a free service. "We are working hard on the side effects stemming from our good synthesis skills," Jang said, emphasizing AI human's positive effects as the technology minimizes the wait for responses between conversations, enabling quick answers.