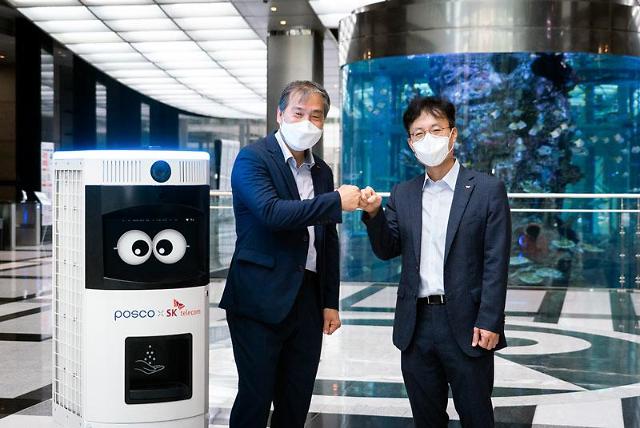 The ball-type gas sensor with a diameter of 60 millimeters (2.3 inches) has a built-in magnet so it can be attached to metal structures. The device's battery lasts up to two years. It is specially designed to have center-of-weight characteristics similar to that of a roly-poly, a children's toy that always sits upright, for better gas detection. It can also be attached to a rope for easy retrieval.

The gas sensor weighs only 100 grams (0.2 pounds) and has a maximum communication range of 100 meters in an open area while the maximum range drops to 30 m in an enclosed space. "We hope that this cooperation with SK Telecom will help make industrial sites safer and enhance the competitiveness of South Korea's manufacturing industry," POSCO's process & engineering R&D center head Kim Ki-soo said in a statement on August 30.

SK Telecom (SKT), a top mobile carrier affiliated with SK Group, said it would cooperate with POSCO to develop AI solution technology that uses self-driving robots and drones to quarantine or detect dangerous signs in workplaces. SKT's sensor solution, which determines the degree of defect in products through deep learning, will be test-applied to POSCO's production process. They would commercialize POSCO's smart surface defect detector (SDD), which is a deep learning AI quality inspection solution.

SKT's self-driving quarantine robot was installed at POSCO's head office in Seoul for a pilot operation. "This cooperation is very meaningful as SKT's AI capabilities are combined with field-oriented technology and solution capabilities of POSCO, which has global competitiveness in manufacturing, to create a specific item," said SKT's smart factory division head Choi Nak-hoon.

With the establishment of 5G mobile communication networks, South Korea has become one of the world's largest testing grounds for connected service robots. A city-run medical center in Seoul has adopted autonomous robots that measure temperature, sterilize negative-pressure wards and carry medical waste to prevent cross-contamination.

SKT has partnered with Robotis, which offers a modularized and standardized solution for robot technology, for cooperation in autonomous robot business based on 5G mobile edge computing (MEC), which enables cloud computing capabilities and an IT service environment at the edge of cellular networks.