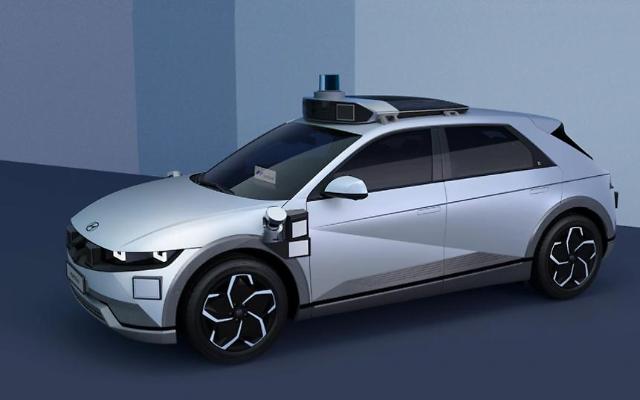 
SEOUL -- Motional, a joint venture between South Korea's Hyundai auto group and Aptiv, a global technology company with advanced mobility solutions, has unveiled the basic design of a robotaxi featuring level 4 autonomous driving technologies that will be showcased at IAA Mobility, a motor show to be held in Munich in September.

The robotaxi is based on IONIQ 5, a new Hyundai crossover utility vehicle installed with a dedicated new battery platform. Level 4 autonomous vehicles have cockpits, allowing drivers to take over control if needed. The most promising direction of level 4 is a robotaxi that navigates around places by communicating with on-road structures such as traffic lights and pedestrian crossings and other vehicles.

The IONIQ 5 robotaxi is Motional's first commercial vehicle that will begin transporting passengers in 2023 through a partnership with Lyft, a ride-hailing app. based in San Francisco, the auto group said in a statement on August 31. The robotaxi has more than 30 sensors that provide 360-degree perception, high-resolution images, and long-range detection of objects for safe autonomous operation in diverse driving environments.

"This robotaxi represents Motional’s vision of a driverless future becoming a reality," Motional CEO Karl Iagnemma was quoted as saying. The robotaxi cost-optimized for global production will be outfitted with Motional's proven driverless technology such as an advanced machine learning system.

The vehicle's sensor suite displayed across the exterior detects road conditions located up to 300m long distance and is directly related to the safety and reliability of self-driving cars. "For the IONIQ 5-based robotaxi, we have applied various redundancy systems, in addition to a suite of essential technologies to ensure safety and convenience of the passengers," said Hyundai's autonomous driving center head Jang Woong-jun.

The interior will allow passengers to intuitively interact with the vehicle during their ride, such as directing the robotaxi to make an extra stop. The robotaxi comes with advanced safety and reliability, and is globally scalable, uniquely positioning the robotaxi for cost-effective commercialization, Hyundai said. In an unusual road scenario, such as road construction or flooding, a remote operator could instantly connect to the vehicle and direct it to a new path.

The robotaxi underlines Hyundai's efforts to speed up the development of autonomous driving technologies. In 2019, the group's parts-making wing, Hyundai Mobis, partnered with Yandex, a Russian company specializing in Internet-related products and services, to develop a deep learning-based platform for autonomous driving. The platform will ultimately become a foundation for a driverless mobility service, such as driverless taxis.