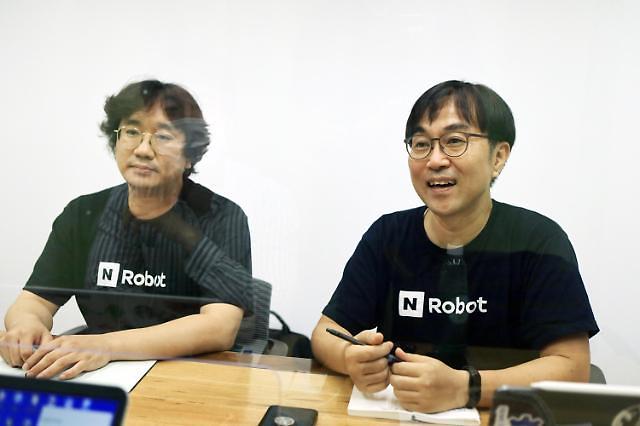 
SEOUL -- Naver, a top web portal operator and IT company in South Korea, will test "5G brainless robots" in what was called the world's first robot-friendly building where robots controlled by a cloud system coexist with human workers through the combination of new technologies such as autonomous driving, cloud and artificial intelligence.

Naver will use the robot-friendly building as a global reference space where "private 5G" networks, cloud, robots, autonomous driving, digital twin, and AI are connected and fused into one. Employees would experience new workspaces where space itself becomes a secretary, such as access to space through face recognition and delivery using autonomous robots. Contactless orders will be possible in restaurants and cafes.

The robot-friendly building would be completed by the end of this year next to its headquarters in Bundang in the southern satellite city of Seoul. "The second building is a testbed for new technologies such as 5G brainless robots and self-driving," said Kang Sang-chul, who heads the platform division of Naver's AI, robot and autonomous technology wing, Naver Labs, which has been involved in the development of various robot-related technologies.

For indoor guidance services, Naver Labs has used a self-driving mapping robot, AI and augmented reality technology to create 3D maps. "The characteristic of Naver robots is that they put parts that correspond to brains in the cloud. If the robot's brain is in the cloud, it can make a smart robot at a low cost. It is 5G that connects robots and clouds well," Kang said in an interview with Aju Business Daily.

Without resorting to base stations run by mobile carriers that are optimized for smartphones, a separate 5G experimental station will be established as a preliminary step to introduce a private 5G corporate network that will play a major role in spreading robot technology. "Before providing robot services to users, they can be tested in various environments," Kang said.

Kim Jong-hyuck, a Naver Labs manager, said the cloud of Naver's data center would be connected with the second building to control and command robots and accumulate data for actual use. "Robots should move horizontally and vertically for delivery, communicating with a lot of gates and elevators. We can carry out a test to control them through the cloud."

Robots will receive parcels from the company's business support center and bring them to the seats of employees, Kang said, adding that Naver would conduct a test to carry coffee or lunch boxes as "delivery is the most useful thing that service robots can do."

"While downloads account for a large portion of smartphones, such as watching videos, robots have a similar share of uploads and downloads. Robots exchange data quickly with the cloud. It is important to test a communication environment that is suitable for purpose and optimize robots accordingly," Kang said, describing 5G as a very important factor to make robots smarter.

"5G has a lot of potential in the future. We found the answer in robots," Kang said, suggesting that robot arms and four-legged robots could be introduced later. A human-robot interaction team is carrying out a study on how robots achieve comfortable communication with humans while safety checks are being conducted systematically for the coexistence of robots and humans.