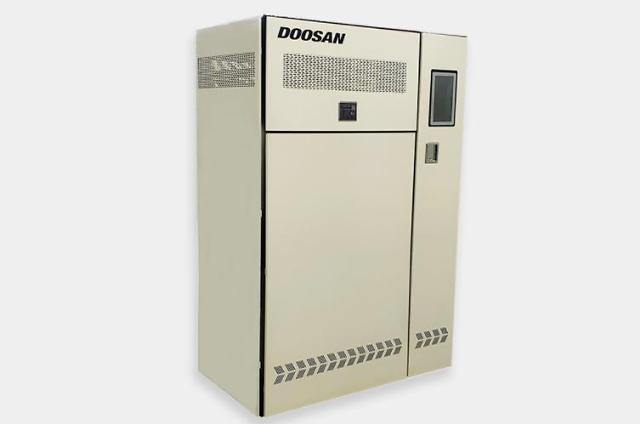 
SEOUL -- Doosan Corporation, the holding company of South Korea's Doosan Group, has diversified a lineup of fuel cells for buildings and houses by completing the development of a 10-kilowatt solid oxide fuel cell system with the world's highest electricity generation efficiency. Commercial production is possible from 2022.

PEMFCs operate in relatively low temperatures at around 93 degrees Celsius (200 degrees Fahrenheit). The electrical efficiency of PEMFCs is about 40 percent. Doosan said its new SOFC product is similar in size to other SOFC products of 5kW or less, which are already on the market, so it can save about 50 percent of space.

"We can be confident that the power generation efficiency of this product is the world's highest," Kim Deok-hyun, a general manager in charge of Doosan's fuel cell business, said in a statement on September 1.

SOFC uses common gas such as hydrogen as the main source of fuel and is considered to be the most stable and power-efficient among its fuel cell brothers. Because SOFC has a high power output compared to its size, the fuel cell system is ideal for powering mega-sized heavy equipment such as oil tankers and giant tunnel boring machines.

In March, Doosan Fuel Cell, the clean energy wing of Doosan Group, partnered with the Hyundai shipbuilding group to co-develop a megawatt-class SOFC system for vessels that will use liquefied natural gas to have a power output of more than 40 percent compared to conventional diesel engines.

South Korean shipbuilders have jumped into the race to develop new SOFC systems. Many vessel operators are switching to clean energy systems as the International Maritime Organization (IMO), a U.N. maritime safety agency, has adopted mandatory energy-efficiency measures to reduce emissions of greenhouse gases from ships.

In January, a crude carrier with a SOFC propulsion system developed by Daewoo Shipbuilding & Marine Engineering won certification from the American Bureau of Shipping, a maritime classification society. Samsung Heavy Industries has partnered with Bloom Energy to develop core technologies for highly efficient solid oxide fuel cells for ships by 2022.