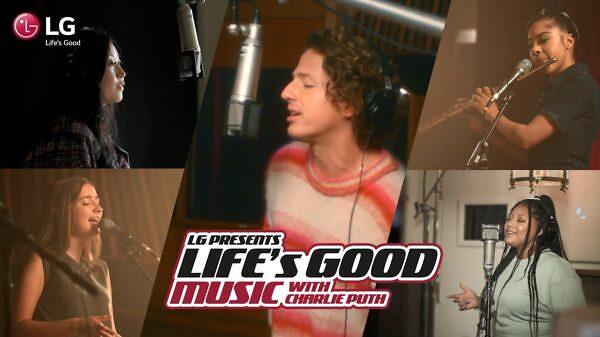 SEOUL -- Through its YouTube channel, LG Electronics released the music of an international campaign led by American singer-songwriter Charlie Puth to help young people create songs and video content about meaningful memories in life and post them on social media.

LG's "Life's Good" campaign is aimed at giving young people the opportunity to let their creativity and talent shine. Artists covered Puth's song in their own unique ways and uploaded video content onto social media.

Launched in May, the project targeting Millennial and Z generations received more than a thousand entries from 36 countries. Puth has selected four winners for collaboration, including Sade Whittier and Stacey Capers of the United States, Stacey Ryan of Canada, and Danielle Kim, a Korean-American artist known for her stage name Dani.

From September 3 to the end of the year, their music video will be screened on electronic boards in Times Square in New York and Piccadilly Circus in London. Fans can take part by posting a video of themselves dancing along to the catchy, new track.

"Meeting and collaborating with artists from around the world was an amazing experience and I was so impressed with all of their talent," Puth said in a statement released by LG on September 3. "The song we created together is really wonderful and I can’t wait for everyone to hear it."

Jackson Tisi, a filmmaker, who won the Gold Award for his short documentary film "Leon" at the "Young Director Award 2020," has produced a 20-minute story by editing video clips uploaded by creators. The film project is intended to convey a universal message of hope and celebrate the diversity of experiences and viewpoints of young auteurs through their inspiring, unique stories.

"The film demonstrates the beautiful differences of the human diaspora and our various environments, while also revealing how completely tied in soul and spirit we are and have further become due to the global COVID-19 pandemic," Tisi said earlier.