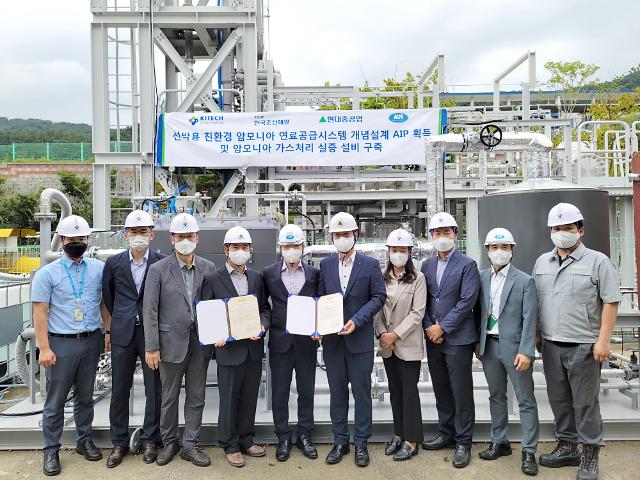 SEOUL -- The conceptual design of a fuel supply system developed by South Korea's Hyundai shipbuilding group for an ammonia propulsion system has won approval in principle from Korean Register (KR), a domestic maritime classification society. The system has a double leakage prevention system that can completely block even a very small amount of leakage to maintain a high level of safety.

The system is a highly efficient eco-friendly facility that removes nitrogen oxides from exhaust gas by utilizing ammonia evaporative gas that is naturally generated during navigation, and uses residual evaporative gas as engine fuel, according to Korea Shipbuilding & Offshore Engineering (KSOE), the holding company of the shipbuilding group.

Ammonia is a compound of nitrogen and hydrogen. Though common in nature, it is both caustic and hazardous in its concentrated form. Ammonia contains no carbon but it needs pilot fuel for combustion. It is seen as a suitable ship fuel for the post-carbon era due to its stability in supply and relatively easy storage and transportation. Ammonia requires less storage volume than hydrogen and is cheaper to make than synthetic carbon fuels.

"With this technology development, we will take a step closer to the commercialization of ammonia propulsion ships," an unnamed KSOE official was quoted as saying. "We will also accelerate the development of carbon-free and eco-friendly ships such as electric and hydrogen propulsion ships."

The International Energy Agency (IEA) predicts that the use of ammonia and hydrogen for ship fuel will gradually increase. In response to tightened international regulations, South Korean shipbuilders work hard to secure a competitive edge in eco-friendly vessels.

Hyundai Heavy Industries will go public on September 16, reflecting this year's robust performance. The world's largest shipbuilder has won 59 orders worth $8.6 billion by the end of July, exceeding its annual target of $7.2 billion. "We will focus on investing in eco-friendly future technologies to solidify our top position in the shipbuilding industry in the next 50 years," CEO Han Young-seok said in a statement on September 2.

Out of funds estimated at up to 1.8 trillion won ($1.5 billion) to be procured through an initial public offering, the shipbuilder would invest 310 billion in eco-friendly and digital ship technologies, 320 billion in smart shipyards and 130 billion in hydrogen infrastructure. In March, the shipbuilding group unveiled a new business roadmap to establish a hydrogen value chain by 2030.

The shipbuilding group has joined a joint project to produce green hydrogen using electricity generated by a major floating wind farm complex that will be built off the southeastern port city of Ulsan. Green hydrogen is produced from water using renewable power.