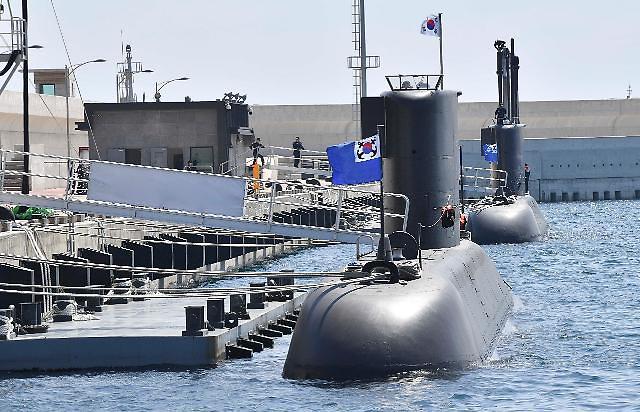 The Agency for Defense Development (ADD), a state-run defense technology research body, supervised an underwater injection test on September 1 to launch a ballistic missile from South Korea's first 3,000-ton submarine named "Dosan Ahn Chang-ho" which was delivered for naval missions on August 13, Yonhap said, adding South Korea's SLBM named "Hyunmoo 4-4" was based on a Hyunmoo-2B ballistic missile that can fly over 500 kilometers (310 miles).

A ground injection test was carried out at the end of 2020, followed by an underwater injection test using a barge, and the military aims to produce and deploy SLBMs after conducting one or two more test launches, Yonhap said.

Pyongyang's persistent push for the development of nuclear weapons and long-range ballistic missiles prompted Seoul to extend the range of ballistic missiles and seek U.S permission on the development of SLBMs. At a state shipyard in Sinpo, a port city in central South Hamgyong province, the South's defense ministry has collected circumstantial evidence on the construction of a new 3,000-ton submarine capable of carrying three SLBMS by upgrading the Sinpo-class submarine.

North Korea tested its first SLMB called Pukguksong-1 (KN-11) in 2016 and the second one four months later. In October 2019, Pyongyang claimed to have successfully tested a new-type SLBM called Pukguksong-3, saying it scientifically and technically confirmed "key tactical and technical indexes" of the newly-designed missile.

South Korea's SLBM test launch was possible after Washington lifted restrictions on missile development at summit talks between U.S. and South Korean leaders in May 2021. There have been unconfirmed reports that South Koreas has pushed for the development of powerful ballistic missiles with a warhead weight of up to three tons capable of destroying underground command facilities and missile silos.

"Dosan Ahn Chang-ho" is a diesel-electric submarine with a vertical launch pad capable of firing six SLBMs in a cold launch method. Military experts say the new submarine can sail at a maximum speed of 37 km per hour with about 50 people aboard. It is 83.5 meters long and 9.6 meters wide and can operate underwater for 20 days without surfacing by using an air-independent propulsion system and fuel cell batteries.

South Korea aims to deliver a 3,600-ton diesel-electric submarine installed with lithium-ion batteries in 2026. Lithium-ion batteries are more power-efficient, take up less space and improve underwater navigation capability and high-speed maneuvering. The next target is a 4,000-ton submarine. The defense ministry has maintained a task force related to a nuclear-powered submarine.