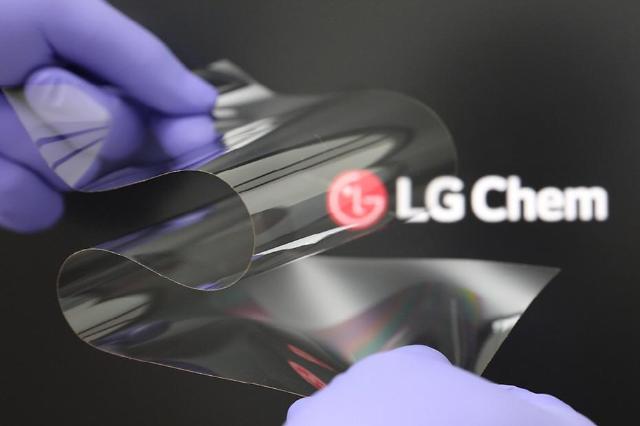 SEOUL -- Using a new coating technology, LG Chem, the chemical unit of South Korea's LG Group, has developed a cover window for foldable IT devices. The flat surface is hard like glass, but folding parts are flexible like plastic. Commercial production is possible in 2023.

Cover windows for IT devices are a key material that protects display panels from impact while conveying clear images. Unlike polyimide films and tempered glass, LG Chem said its cover window provides solutions optimized for foldable phones by maximizing flexibility and improving chronic folding marks of the connection.

Commercialized cover windows are optimized for in-folding, where the screen folds inward, while LG Chem's cover window is able to implement out-folding. Compared to tempered glass, the company said its "real folding window" is thinner and has the same level of hardness, but there is no crack phenomenon.

LG Chem said the price competitiveness of its new cover window is superior to that of polyimide films, and durability is maintained even if it is folded more than 200,000 times. "We will strengthen our partnership with leading smartphone manufacturers and expand its foldable application to laptops and tablets starting with mobile phones," LG Chem's IT materials business head Jang Do-gi said in a statement on September 7.

LG Chem said its cover window supplemented the heat resistance and mechanical properties of plastic materials by coating new materials on both sides of polyester or polyethylene terephthalate (PET) film. PET materials exhibit good chemical resistance and are tough. The company aims to develop a thin cover window by coating alone without a separate PET film that can be applied to foldable phones and rollable IT devices requiring thin thickness.

Colorless polyimide (CPI) films have been used as an alternative to glass displays, but they are prone to scratches and creases that are created when folded and unfolded repeatedly over a long time. Also, some users find it not clear or transparent enough compared to glass displays.

Samsung Display has commercialized ultra-thin glass (UTG), which offers many advantages over plastic or silicon. Hardened UTG is scratch-resistant and bendable and shows no signs of fatigue. The downside of CPI was clearly shown in Samsung's first foldable phone, Galaxy Fold, which was criticized for the weak durability of its display when its mass-produced version was handed to reviewers in 2019.