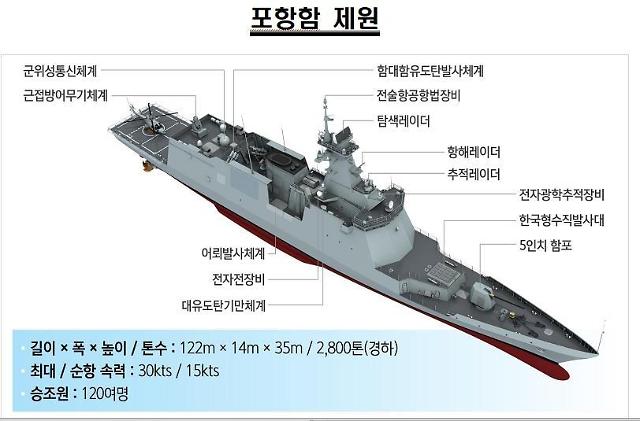 
SEOUL -- South Korea's navy launched a new 2,800-ton frigate armed with a five-inch cannon, guided missiles and torpedoes at the shipyard of Daewoo Shipbuilding & Marine Engineering. It was the sixth FFX Batch II frigate which is 122 meters long and features a hybrid propulsion system to reduce underwater radiated noise and a towed array passive sonar system.

The FFX Batch II frigate can accommodate a maritime helicopter and carry Hongsangeo (Red Shark) torpedoes and ship-to-ground missiles that can fly up to 200 kilometers (124 miles) and explode with hundreds of shells. The first FFX Batch II frigate capable of sailing at a speed of 30 knots was commissioned in 2018.

South Korea has developed various torpedoes, including Chungsangeo (Blue Shark) which is a light anti-submarine torpedo with an operational range of 19 km that can be deployed from surface ships, helicopters and aircraft. The Blue Shark torpedo is 2.7 meters long and weighs 280 kilograms.

Hongsangeo (Red Shark) is deployed on surface ships, maritime helicopters and anti-submarine patrol aircraft. The precision-guided torpedo with an operational range of 19 km can be launched vertically from ships before being deployed by parachute near the intended target and submerging into the sea to track and destroy targets. It weighs 820 kg. Bumsangeo (Tiger Shark) is a wire-guided heavyweight torpedo being developed to strike enemy surface ships and submarines from a distance. The Tiger Shark torpedo weighs 1.7 tons and has a range of 50 km.

To replace an aging fleet of corvettes and frigates, South Korea has launched the FFX program that calls for the construction of six 2,300-ton Incheon-class ships for the first batch, eight 2,800-ton ships for the second batch and six 3,500-ton ships for the third batch. The 129-meter-long Batch III frigate that is scheduled to enter service in 2024 will feature a phased array radar and an electro-optical targeting system and can sail at a speed of 30 knots with 120 personnel on board.

New frigates are armed with a close-in weapon system called "Haegung (sea bow)," designed to intercept missiles and aircraft. Haegung with a dual detector system -- active radar guidance and an infrared detector -- adopted a vertical firing method, with its development related to Cheongung, a surface-to-air missile (SAM) system developed with technical support from Russia's Almaz-Antey and Fakel, that can intercept targets up to an altitude of 15 km at a range of 40 km.