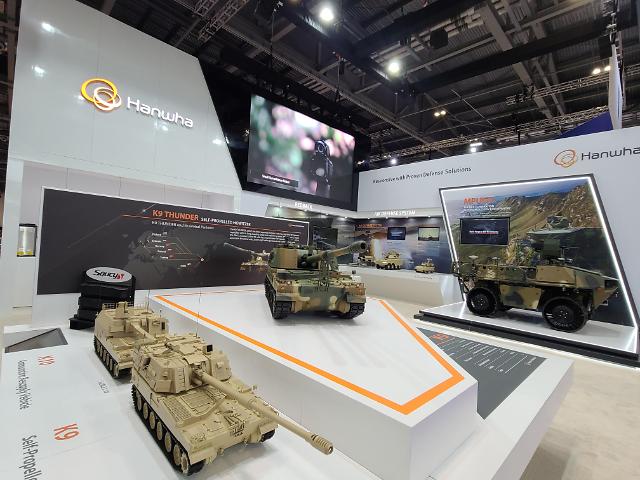 
SEOUL -- Hanwha Defense bolstered its bid for a British arms acquisition program through the creation of an industrial partnership called "Team Thunder" with local defense companies on the sidelines of a defense and security trade exhibition in London to supply a variant of the world's most popular self-propelled howitzer, K9 Thunder.

During the Defense and Security Equipment International (DSEI) on September 14-17 at ExCel, Hanwha Defense is to sign memorandums of understanding with Team Thunder partners including Leonardo UK, Pearson Engineering, Horstman Defence Systems and Soucy Defense of the Soucy Group. Hanwha said Lockheed Martin UK is also in talks to join the team to be followed by more partners.

K9's most advanced version, K9A2, will be proposed for Britain's Mobile Fires Program (MFP). The British version features a fully automated turret capable of firing nine rounds per minute. With the automated turret, the crew number would be reduced from five to three. Hanwha Defense said that a plan is being examined to equip the howitzer with composite rubber tracks that improve road mobility.

"Team Thunder will be a key pillar of Hanwha Defense's bid for the Mobile Fires Platform program, and the formation of Team Thunder demonstrates a firm commitment to bringing the maximum benefit to the UK industry through a robust partnership with local suppliers," Vice President Oh Kye-hwan of Hanwha Defense's overseas business division said in a statement on September 14.

Oh said that a substantial part of manufacturing would take place in Britain. Other localization plans will include training programs to support workforce development. Hanwha Defense has already had positive experiences of industrial partnerships in Poland and India, while industrial capability programs are also taking shape in Australia for the potential production of K9’s Australian version.

The South Korean company has tried to establish the Team Thunder partnership with one eye on the export market with the potential for Britain to become a regional hub within the global supply chain of K9 family vehicles. Nearly 1,700 K9 variants are in service with seven countries including South Korea, Turkey, Poland, Finland, India, Norway and Estonia. Australia would be the eighth customer operating K9 vehicles.

At DSEI, Hanwha Defense displays K9A2 and the multi-purpose unmanned ground vehicle (M-UGV). The four-wheeled 1.5-ton electric vehicle can move at a top speed of 30 kilometers (18.6 miles) per hour on paved roads and is operated either remotely or autonomously to carry out various missions such as surveillance, logistics transport, evacuation of casualties, and combat engagement. A six-wheeled version dubbed the Intelligence UGV (I-UGV) is set to be unveiled in late 2021. The I-UGV is to features a payload capacity of 500 kg and a cruising radius of 100 km.