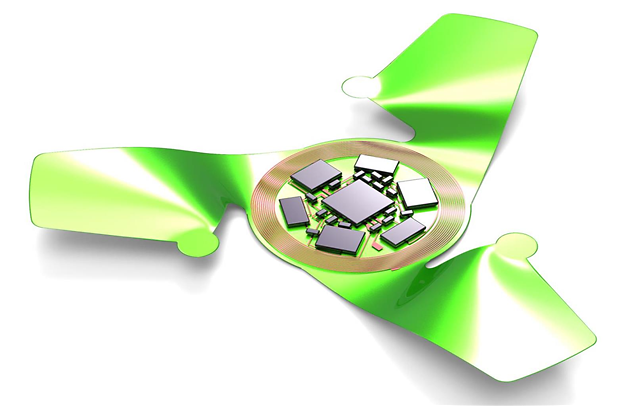 SEOUL -- In a government-sponsored study, researchers have designed unpowered three-dimensional electronic micro-fliers that can be sprayed into mountains and fields to monitor environmental pollution when combined with internet of things (IoT) electric circuits, inspired by wind-dispersed seeds.

Electronic fliers are active-type, and there is a limit to miniaturization due to mechanical parts and complex design. It is very difficult to improve the energy efficiency consumed in flight. Researchers have created a passive-type flier with optimal efficiency, the Ministry of Science and ICT said in a statement on September 23.

A joint study led by Kim Bong-hoon, a Soongsil University professor, and John A. Rogers from the Querrey Simpson Institute for Bioelectronics at Northwestern University opened the way for the easy manufacturing of IoT devices that can accurately measure the concentration of fine dust in the air as the passive-type electronic flier can be reduced to a very small size, the ministry said.

"Through follow-up research, we will be able to develop next-generation robots and aircraft that can monitor and observe new types of environmental pollution in mountainous terrain," Kim was quoted as saying.

Techniques in the mechanically guided assembly of 3D mesostructures provide access to miniature, 3D fliers optimized for such purposes, in processes that align with the most sophisticated production techniques for electronic, optoelectronic, microfluidic and microelectromechanical technologies, the team said in its research paper published on the website of Nature, a scientific journal based in London.

Researchers demonstrated a range of 3D macro-, meso- and microscale fliers, including those that incorporate active electronic and colorimetric payloads, the team said. "Analytical, computational and experimental studies of the aerodynamics of high-performance structures of this type establish a set of fundamental considerations in bio-inspired design, with a focus on 3D fliers that exhibit controlled rotational kinematics and low terminal velocities."

"Battery-free, wireless devices and colorimetric sensors for environmental measurements provide simple examples of a wide spectrum of applications of these unusual concepts," the team said.