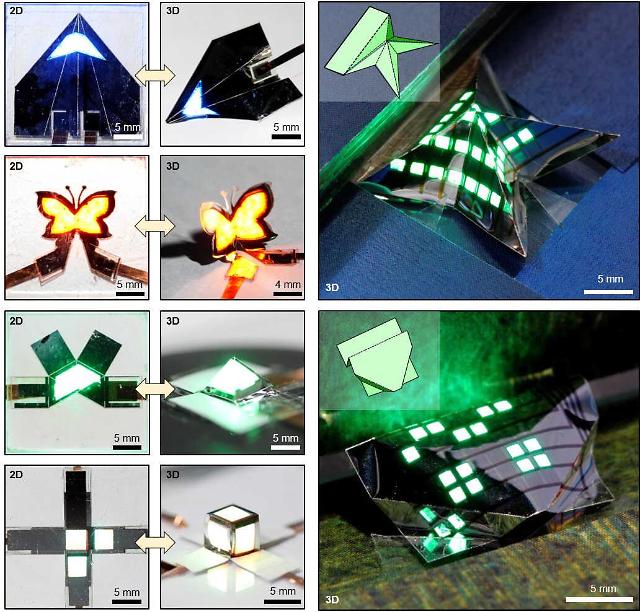 
SEOUL -- A state research institute in South Korea has developed core technology for the production of foldable quantum dot light-emitting diode (QLED) displays that can be folded in and out like origami objects such as a paper-folded flower or a paper-folded crane. The technology will pave the way for the development and production of foldable displays that can be used for tiny wearable devices and electronic products with built-in displays.

A QLED display is a variant of a light-emitting diode (LED) display or liquid crystal display (LCD). It is created by adding a quantum dot film to a sandwich panel of LCDs. Unlike LCDs that require a backlight panel, QLEDs are thinner. The Institute for Basic Science (IBS), a state research institute, succeeded in developing a QLED display panel, which is three micrometers thick, in 2015.

IBS said in a statement on September 27 that its research team has developed a selective laser etching technology for QLED displays. When a selected area of the outermost epoxy layer of a QLED panel is etched, the etched area works as a hinge-line that can be folded inwards or outwards. IBIS said that its foldable QLED panel has a protective layer made of an alloy of silver and aluminum just underneath the epoxy layer to prevent the laser from cutting too deep.

Through experiments, researchers created a foldable QLED panel with a bending radius of fewer than 50 micrometers. IBS said that if a display panel has a radius of curvature of fewer than 50 micrometers, it will look as if it is folded flat to human eyes. The display panel maintained its brightness without a dead pixel after it was folded in and out more than 500 times.

"This foldable QLED technology will become very useful in small-sized displays for electric paper or newspaper devices and tablet PCs. This development has a great meaning as it has the potential to open a new era in which consumers can get their own personalized displays," IBS head researcher Hyun Taek-hwan was quoted as saying. IBS said the technology would help manufacturers commercialize various devices with different form factors.