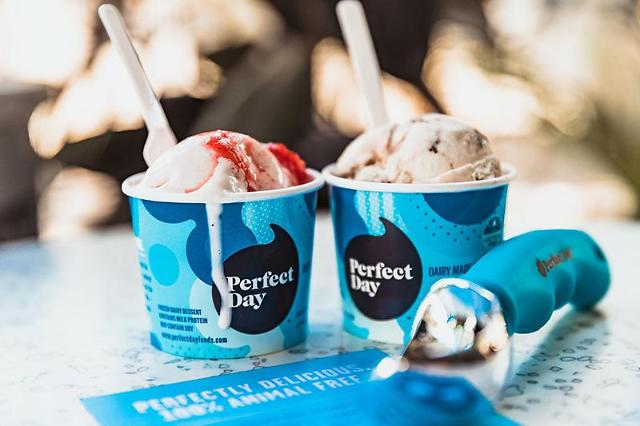 
SEOUL -- Based on Chairman Chey Tae-won's strong interest and motivation, South Korea's third-largest conglomerate SK Group is pushing for the active expansion of its alternative food business through bold investments and strategic partnerships with foreign and domestic companies. The initial goal is to lead Asia's alternative food market with high potential.

SK Inc., an investment-oriented holding company of SK Group, partnered with STIC Investments, a domestic venture capital, to invest $55 million in Perfect Day on top of its first investment estimated at $45 million in 2020 in the U.S. protein fermentation company which has developed processes of creating dairy proteins, including casein and whey, by fermentation in microbiota, specifically from Trichoderma fungi in bioreactors, instead of extraction from bovine milk.

Chey has shown interest in alternative foods by posting pictures of Perfect Day products including ice cream on his personal Instagram account in August. "The best one is the vanilla ice cream made with fermented dairy protein," he said, adding it was difficult to conjure up the taste of vanilla with alternative dairy protein.

In a separate deal published on October 1, SK Inc. forged a partnership with SPC Samlip, a bakery brand of South Korean confectionery and bakery giant SPC Group, to make joint investments and find business opportunities by introducing technologies from Perfect Day as well as Meatless Farm, a British company that produces vegan, plant-based meats which are made primarily from pea protein.

"We will increase global business opportunities and strengthen our global position as an ESG alternative food investor by utilizing our unique strengths, global investment capabilities and various networks," SK Inc.'s green investment center head Kim Moo-hwan said in a statement. He said SK Inc. would tap Asia's alternative meat markets through collaboration with SPC Samlip and China's Joyvio Group, which is the largest producer of blueberries and kiwis.

Environmental, social, and corporate governance (ESG) is a trendy corporate operation method that focuses on the use of green energy and environmentally-friendly management. Chey has called for the quick adoption of ESG to cope with climate change and ever-tightening regulations on greenhouse gas emissions.

SK Inc. and Joyvio agreed in July to create an alternative food investment fund, invest in alternative protein manufacturing such as plant-based meals and protein fermentation, and push for cooperation with food tech companies such as vertical farming, which is the practice of growing crops in vertically stacked layers and often incorporates controlled-environment agriculture.

SK Group has spearheaded a push by domestic companies to expand the base of alternative food markets. The domestic alternative meat market is still small, but market researchers forecast rapid growth. According to data from the Korea International Trade Association(KITA), alternative meat would account for more than 30 percent of the global meat market by 2030 and 60 percent by 2040, as concerns over animal welfare and food security spur the global demand for meat alternatives.

Many companies and researchers in South Korea and other countries are trying to establish a new paradigm for the mass production of plant-based or cultured meat by lowering costs through technological advancements. Potential factors of consumer acceptance are healthiness, safety, nutritional characteristics, sustainability, taste and lower prices.

Plant-based meats imitate meat and are most commonly made from soy, peas, beans, mushrooms, mung beans, or wheat gluten. Cultured meat is produced by in vitro cell culture of animal cells. The production of cultured meat used to be expensive, but costs have been lowered through technological advancements. Biomass fermentation uses high-protein content and the rapid growth of microorganisms to efficiently make large amounts of protein-rich food.

In 2021, there have been a series of investments by major South Korean companies to launch or expand their businesses in alternative food markets. SK Inc. invested about 29 billion won in Nature's Fynd that has developed an alternative protein source rich in nutrients using microorganisms and self-fermentation technology found in the Yellowstone National Park.

A month later, Shinsegae Food affiliated with South Korea's retail group Shinsegae released an alternative meat brand starting with lunch meats, known as cold cuts, which are precooked or sliced and typically served in sandwiches or on a tray. Shinsegae enhanced the taste and flavor of alternative meat using soybean protein and vegetable oil and fat ingredients and implemented ham's unique elasticity and chewy texture using polysaccharides extracted from algae and fiber.