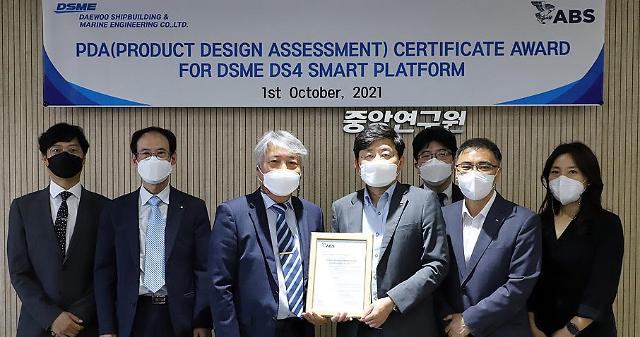 SEOUL -- A smart ship platform developed by Daewoo Shipbuilding & Marine Engineering, a major shipbuilder in South Korea, has secured certification from an international classification society in the United States. The shipbuilder thinks the certification will simplify the process of applying its smart system to ships without separate verification.

Daewoo Shipbuilding & Marine Engineering (DSME) said its DS4 smart ship platform won "Product Design Assessment (PDA)" from the American Bureau of Shipping (ABS). DSME said the quality of its solution was objectively verified by meeting more specific and reinforced requirements so that it could be applied immediately to actual ships.

DSME is the industry-first to obtain PDA certification in the field of cyber safety. The company would provide a smart ship solution that guarantees safety against external cyber threats, as well as systems necessary for maintaining and repairing various data that help ships operate optimally.

DSME regards cybersecurity as a key element of autonomous ships. "We believe this certification will serve as a cornerstone to advance the era of autonomous ships," DSME's R&D institute head Choi Dong-kyu said in a statement on October 5.

As South Korean shipbuilders work hard to develop smart ship technologies, the demand for cybersecurity protection has grown because of the rapid convergence of operational information and communication technologies. Cybersecurity technology is designed to protect data and software from outside threats.

Smart ships are expected to revolutionize the landscape of ship design and operations. Along with efficiency in traffic, smart ships can minimize human errors that caused about 70 to 80 percent of marine accidents. Smart shipping can be divided into unmanned ships ruled by an operator from a control center onshore and autonomous ships which use a computer on board that takes decisions about the route, speed, fuel consumption, maintenance and even mooring in the harbor.