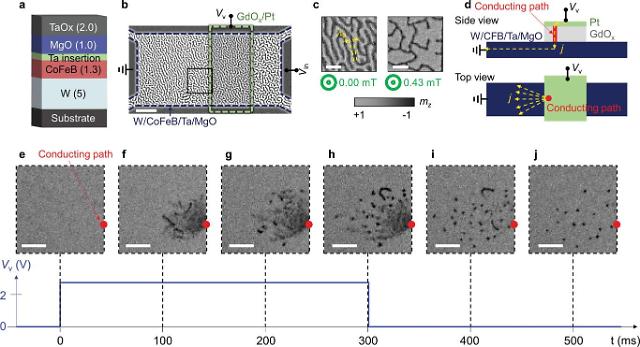 SEOUL -- Researchers have developed core technology based on a magnetic quasiparticle vortex called "skyrmion" that can be used in the creation of next-generation electronic devices including semiconductors. Skyrmions have the potential to store huge quantities of data.

Skyrmions, which are nanometer-sized magnetic film structures that spin on the surface of the magnet like tiny vortices, were first found in 2009. Scientists believe that tiny spinning magnetic films can store much denser quantities of data than currently available magnetic data storage devices.

However, such a theory was hard to prove as the nano-sized magnetic quasiparticles are controlled by electric currents while the maneuvering technique is extremely different due to the tiny size of vortices. Because of their uncontrollable characteristics, skyrmions were mainly tested through computer simulations.

The Korea Research Institute of Standards and Science (KRISS) said in a statement that a joint team involving researchers from KRISS and the Daegu Gyeongbuk Institute of Science (DGIST) succeeded in generating and deleting bubbles of skyrmions in a lab environment using a vertical current injection technique.

"We were able to prove the existence of skyrmion devices that were only theoretically proposed," KRISS senior researcher Hwang Chan-yong was quoted as saying. He said the skyrmion technology can be applied to the creation of next-generation magnetic memory technologies. Because of their potential to become a key component of large-capacity memory devices, skyrmions are regarded as next-generation digital synapses for neuromorphic computing and other electronic devices that require ultra-fast computing.