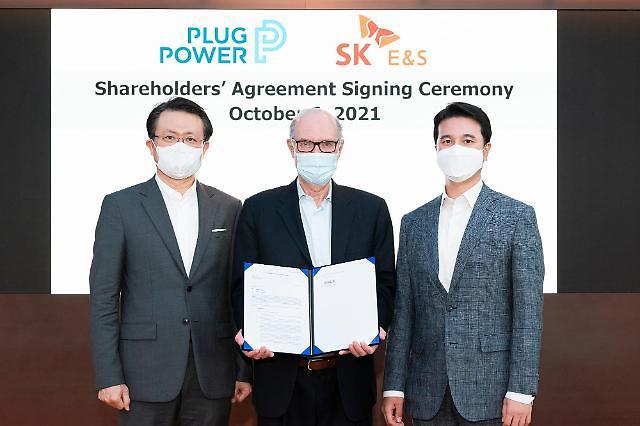 Under an agreement signed on October 6, SK E&S will own 51 percent of the joint venture and the remainder will be controlled by Plug Power. By 2024, the joint venture will build a research center and a factory that produce fuel cells and water electrolysis facilities. In January, SK Inc., an investment-oriented holding company of SK Group, made a $1.5 billion equity investment to acquire a 9.9 percent stake in Plug Power, which operates a hydrogen highway across North America.

By utilizing Plug Power's technology, the joint venture will significantly lower the unit price of water electrolysis facilities and polymer electrolyte membrane fuel cells ((PEMFCs) and supply them to domestic and Asian markets. PEMFC is a type of fuel cell being developed mainly for transport applications as well as for stationary and portable fuel-cell applications due to its high energy efficiency, simple structure and excellent durability.

"The establishment of this joint venture is meaningful in that it has secured a bridgehead for entering the Asian market based on Plug Power's core hydrogen-related technologies," SK E&S CEO Choo Hyeong-wook said in a statement. "It will be a great competitive edge in building a hydrogen ecosystem."

SK Group promotes hydrogen as a new growth engine. The group has presented a goal to build a plant capable of producing 30,000 tons of liquefied hydrogen per year from 2023, with SK E&S producing 250,000 tons of blue hydrogen from 2025. In March, SK E&S earmarked $1.4 billion to develop gas fields in northern Australia and bring in 1.3 million tons of liquefied natural gas per year for 20 years from 2025.

Blue hydrogen is produced by applying carbon capture and storage to reduce CO2 emissions. Green hydrogen can be produced through electrolysis, a process of passing an electrical current through an electrolyzer to split water and release only hydrogen and oxygen.