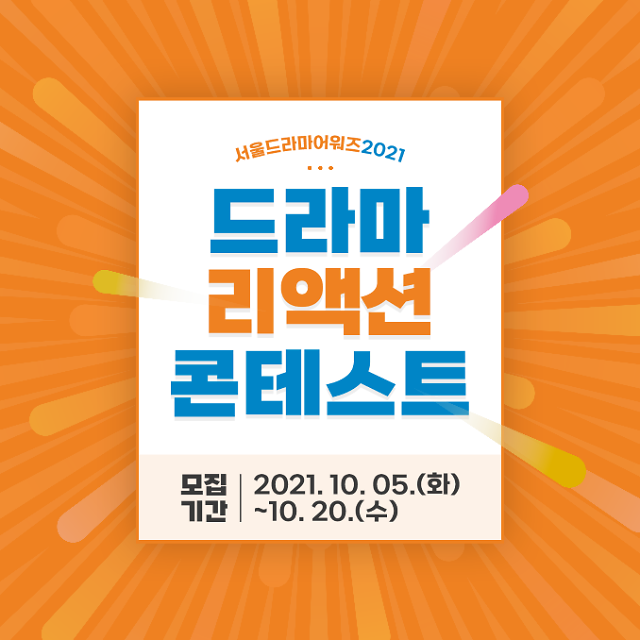 SEOUL -- To promote an international drama awards event, the operator of a Seoul international drama awards event invited global drama fans to participate in an online contest of video reactions. The contest is a mixture of drama content and the culture of reacting to viral videos on YouTube. The event committee will offer prize money after selecting candidates who submitted reaction videos on the trailer for the Seoul Drama Awards 2021 in November.

The Seoul Drama Awards (SDA) Organizing Committee, operated by the Korean Broadcasters Association, said in a statement on October 8 that the committee will offer prize money to those who create the best self-reaction videos after watching one of the trailers. The submission for video reactions began on October 5. Reaction videos can be made in various ways such as dubbing and voice acting, the committee said. There is no language restriction, but videos must be submitted with Korean or English subtitles.

A total of 238 films from 41 countries including Germany, Russia and Thailand were submitted to the 16th Seoul International Drama Awards this year. Among 238 films, 37 trailers are available on Seoul International Drama Awards' official YouTube channel. One of the most famous films is Thailand's "I Told Sunset About You," which features two friends reuniting at a Chinese language school a few years after ending their relationship due to minor misunderstandings. Full videos of the 37 drama films are available on Wavve, South Korea's over-the-top (OTT) platform.

Established in 2006, the Seoul International Drama Awards is the only international drama festival held in South Korea. "Particularly this year, at a challenging time of the COVID-19 pandemic, SDA would like to showcase the dramas that brought smiles, made warmhearted and gave comfort to audiences around the world," the committee's secretary-general Kim Kyoung-tae was quoted as saying.

After reaction videos are reviewed by the committee, they will be uploaded on YouTube and the most popular video will be awarded 1 million won ($837). A total of eight winners of the contest will be announced on November 5. 500,000 won will be given to two teams and 200,000 won to the five teams based on the number of likes on YouTube. The 16th Seoul International Drama Awards is scheduled to take place at Sangam Open Hall operated by South Korea's broadcaster MBC on October 21 and will be broadcast live.
© Aju Business Daily & www.ajunews.com Copyright: All materials on this site may not be reproduced, distributed, transmitted, displayed, published or broadcast without the authorization from the Aju News Corporation.