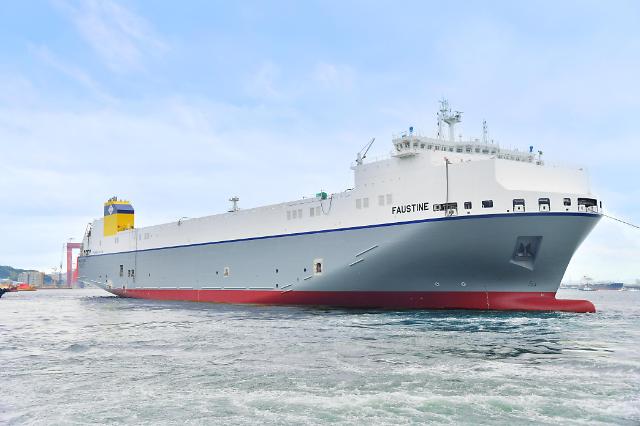 The roll-on & roll-off (RORO) cargo ship is designed to carry wheeled cargo, such as cars, trucks, buses, trailers, and railroad cars, that are driven on and off the ship on their own wheels or using a platform vehicle, such as a self-propelled modular transporter. RORO vessels have either built-in or shore-based ramps or ferry slips that allow the cargo to be efficiently rolled on and off the vessel in port.

Hyundai Mipo said the RORO ship was installed with a dual fuel propulsion system capable of using liquefied natural gas (LNG) or diesel. It was the first LNG propulsion RORO ship built in South Korean shipyards. The vessel is 217 meters long and can sail at a speed of up to 17.6 knots with some 820 cars and 310 trailers on board at its seven-floor deck.

With its dual-fuel propulsion system that discharges little sulfur oxide (SOx) emissions, Hyundai Mipo said the RORO ships named "Faustine" can operate in emission control areas (ECAs) such as Europe and North America. ECAs are sea areas in which stricter controls were established to minimize airborne emissions from ships.

The vessel's LNG fuel tank was applied with nine percent nickel steel that can maintain excellent strength and impact toughness even at cryogenic temperatures of -163 degrees Celsius, the shipbuilder said. A capacitor that supplies electricity using the main engine's rotational power can minimize operating expenses and exhaust gas emissions.

"The demand for ships that are eco-friendly and can create high efficiency is increasing," An unnamed Hyundai Mipo official said in a statement on October 8. "We will do our best to secure more differentiated technological competitiveness based on various construction experiences related to LNG carriers."