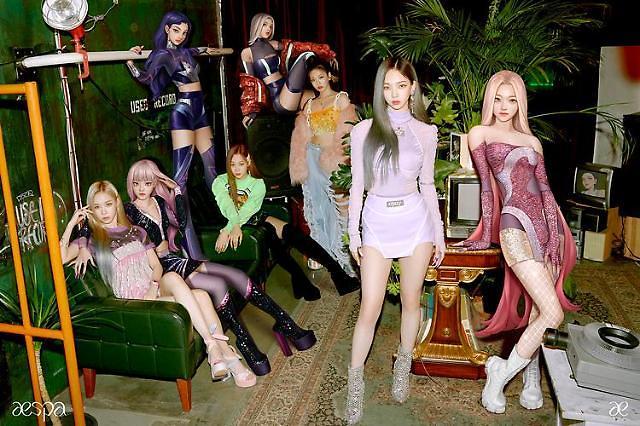 SEOUL -- Aespa, a four-member girl band formed by SM Entertainment, will captivate global fans with a realistic online performance using cutting-edge technologies such as extended reality through an entertainment tool app run by LG Uplus, a mobile carrier in South Korea. There is no limit to the number of live visitors who can watch only on one device after buying tickets.

Aespa, which debuted in November 2020, has garnered attention from global fans for special computer-generated avatar members. Aespa's real-life members and avatars communicate through a connection signal called "Sync" with the help of an AI system. Avatar characters are involved in independent activities, such as producing their own online content, allowing real-world members to meet fans in more diverse ways.

Starting with NCT Dream, the third sub-unit of SM's boy group NCT, on October 12, LG Uplus (LGU+) will broadcast paid XR performances by NCT 127 on November 9 and Aespa on November 20 on U+IDOL LIVE in which players can read news and watch videos of their favorite Kpop idols.

"We have prepared a realistic stage so that fans can meet popular SM artists with our XR technology," LGU+'s XR service head Choi Yoon-ho said. "We look forward to establishing a platform that can deliver vivid experiences to customers not only in current non-face-to-face era and post-COVID-19 eras."

Up-to-date technologies such as mixed reality (MR) have been used for online concerts by BTS and other K-pop bands to console fans who have been mentally fatigued by a COVID-19 pandemic. MR combines VR elements with human vision. In December 2020, BTS members wowed fans at Asia's biggest year-end music show, Mnet Asian Music Awards (MAMA), with a splendid virtual stage and new content based on three-dimensional visual effects and XR to bring digital objects into the physical world and physical world objects into the digital world.

In August 2021, LGU+'s technology was used for a special XR concert held by AOMG, a hip-hop label founded by Jay Park, a Korean-American rapper and singer, allowing audiences to enjoy realistic performances as if they were in virtual worlds.