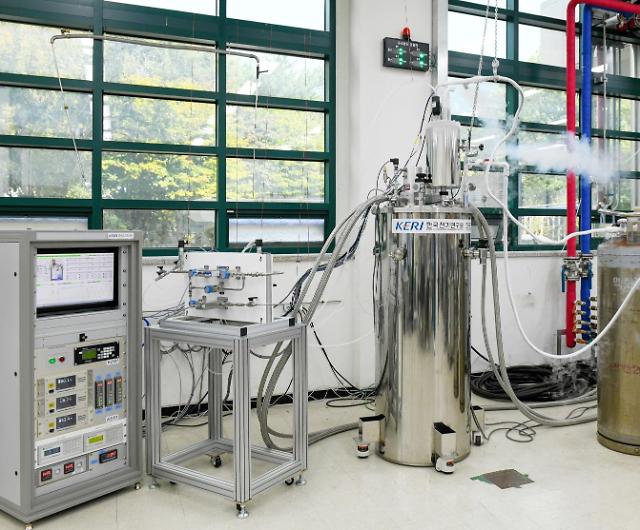 
SEOUL -- South Korean researchers have developed an efficient method to liquefy hydrogen gas with cryogenic cooling technology and store it for a long time. Charging stations can increase the storage amount of hydrogen and transfer much larger amounts of hydrogen safely.

The government-supported Korea Electrotechnology Research Institute (KERI) said its research team has developed a "zero boil-off" system that can reduce or even suppress losses by making hydrogen vaporized in a storage tank into the state of liquid again. The team has succeeded in storing 40 liters of liquid hydrogen for more than two months without losses.

Even if hydrogen vaporizes due to a certain temperature change, it can be re-condensed with cryogenic cooling, the institute said, adding that the new technology can be applied to various fields such as hydrogen mobility and fuel cell power plants for buildings.

Hydrogen charging stations in South Korea store and supply hydrogen in the form of gas, causing difficulties in long-term storage and transfer. "This achievement, which opened the possibility of commercializing liquid hydrogen, is of great significance from an economic point of view," KERI said in a statement on October 13.

The institute would transfer related technology to private companies for commercialization, saying it would contribute to the revitalization of a hydrogen economy. Liquid hydrogen is essential in a government campaign to expand the use of fuel cells.