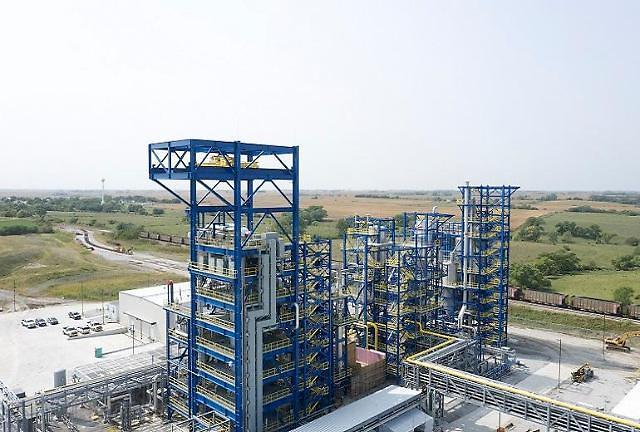 SEOUL -- In a bid to establish an outpost in growing hydrogen fuel markets, South Korea's third-largest conglomerate SK Group expanded its partnership with Monolith, an American green energy company specialized in the production of turquoise hydrogen. A joint venture will be set up to cooperate in clean energy businesses.

SK Inc., an investment-oriented holding company of SK Group formerly known as SK Holdings, said in a statement on October 13 that the company signed a memorandum of understanding with Monolith to set up a joint venture targeting South Korea's clean energy market. "Through cooperation, we will adopt turquoise hydrogen as an important part of SK's hydrogen business portfolio," SK Inc. CEO Jang Dong-hyun was quoted as saying.

SK Inc. also said that SK Group and Monolith will cooperate in carbon-free solid carbon material businesses through the joint venture. Carbon black is widely used in the manufacturing sector as additives that enhance products' physical, electrical and optical properties. The most common products that use carbon black are rubber products. Natural and synthetic elastomers are blended with carbon black and other materials to produce vulcanized rubber (hardened rubber) products.

South Korea has unveiled a road map to reduce carbon emissions and accelerate the adoption of clean energy sources such as renewable energy including electricity generated from solar, wind and micro-hydropower plants, and hydrogen fuel to achieve net-zero emissions by 2050.

SK Inc. and Monolith forged a strategic partnership in June 2021. While financial details were not disclosed, SK Group became the leading investor of Monolith to secure a seat on the American clean energy company's board of directors.

In January, SK Group made a $1.5 billion equity investment in Plug Power, an American company that provides hydrogen fuel cell turnkey solutions and operates a hydrogen highway across North America. Through a joint venture, they aim to build a production base and supply fuel cells and hydroelectric facilities to South Korea and other Asian countries.